Viber releases new design for iPhone, comes to Blackberry 10 for the first time 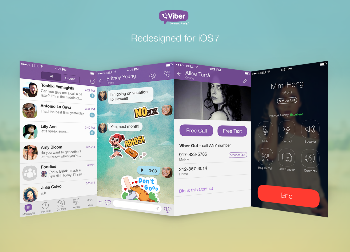 MANILA, Philippines —Viber, (www.viber.com) the leading mobile communications platform offering free messaging and HD-quality phone calls, announced today the release of its redesigned iPhone app that is designed for iOS 7, bringing multiple enhancements to iPhone users. The company has simultaneously released a new mobile app for BlackBerry 10, bringing Viber to BlackBerry’s latest OS with many of the most popular Viber features for the first time.

“Viber has been redesigned from the start for simplicity and ease of use. For our iPhone release we took our cue from the clean, flat look of iOS 7, we wanted Viber to feel like a completely seamless part of the device,” said Talmon Marco, CEO of Viber. “Our BlackBerry 10 app is a beautiful twist on our design delivering the most up to date experience for our users.”

Both the iPhone and BlackBerry apps have been enhanced with powerful new features that expand the functionality of the platform. Importantly, Viber 4.2 for iPhone allows users to send multiple photos and videos at the same time and create a block list of unwanted numbers or contacts.

Top amongst the BlackBerry 10 features are Viber Out and the Viber Sticker Market, which provide users with ways to use the platform, communicate with their friends, and have fun in the process.

In addition, the version features a host of classic features that BlackBerry 10 users have been waiting for: