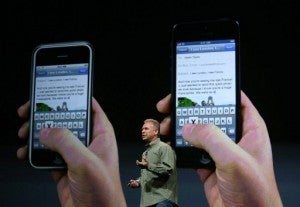 The California-based company said a “small percentage” of iPhone 5 models manufactured through March of 2013 may have on-off buttons that stop working or work intermittently, in a posting on its support website.

“Apple will replace the sleep/wake button mechanism, free of charge, on iPhone 5 models that exhibit this issue and have a qualifying serial number,” it said at the website.

The support web page contained instructions for iPhone 5 owners, along with a way to check serial numbers to determine if smartphones qualify for free repair.

The process began Friday in the US and Canada and will begin in other countries on May 2, according to Apple.

Apple prides itself on the quality of its devices, and offers of free fixes are rare for the company.

In mid-2010, Apple put off dealing with concerns about iPhone 4 reception problems and the ensuing controversy came to be dubbed “Antennagate.”

Apple was forced to address the issue after Consumer Reports, the influential product review magazine, said it could not recommend the iPhone 4 because of signal loss problems it blamed on a design flaw.

Apple downplayed the issue as being the overblown result of the way people held their smartphones and offered free cases as a fix.