China’s Alibaba Group aims to raise $1B in IPO 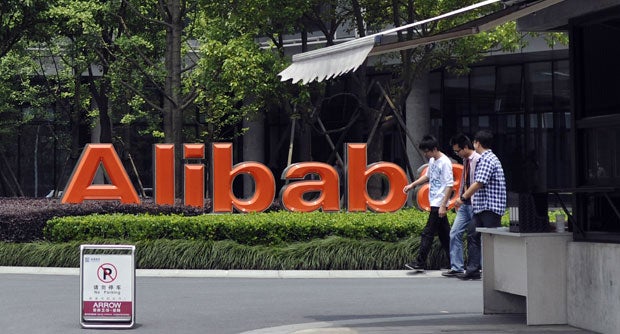 File photo of the headquarters compound of Alibaba Group in Hangzhou in eastern China’s Zhejiang province. Alibaba Group is aiming to raise $1 billion in a long-awaited IPO likely to have ripple effects across the Internet. AP

SAN FRANCISCO—Alibaba Group, China’s leading e-commerce company, is dangling a deal that could turn into one of the biggest IPOs in US history.

In a long-awaited move made Tuesday, Alibaba filed papers for an initial public offering of stock seeking to raise at least $1 billion.

Depending on investor demand for its stock, Alibaba could try to raise more money and even surpass the $16 billion that Facebook raised in its IPO two years ago.

For now, Alibaba isn’t specifying how much stock will be sold in the IPO, or setting a price range or saying which exchange its stock will trade on. Those details will emerge as the IPO progresses. The process is likely to take three to four months to complete before Alibaba’s shares begin trading.

The rise of e-commerce in China has given millions of households wider access to clothes, books and consumer electronics in a society that in the 1980s still required ration tickets for some supermarket items. That was aided by Alibaba’s launch of an online payment system, Alipay, which filled the gap for the shoppers who lacked credit cards.

Still growing at an explosive rate, online shopping is forecast by consulting firm McKinsey to triple from 2011 levels to $400 billion a year by 2015.

Alibaba didn’t choose an optimal time to go public. Several Internet company stocks that soared last year amid high hopes have plummeted this year as investors reassess their prospects. Twitter Inc. has been among the hardest hit. Since hitting a peak of $74.73 late last year, the company’s shares have lost more than half their value. They closed Tuesday at $31.85, just slightly above their $26 IPO price.

Despite the skittish conditions for Internet stocks, most analysts expect Alibaba’s IPO to bring in at least $10 billion, and sell its stock at a price that will give the 15-year-old company a market value of $150 billion to $200 billion. If those predictions are accurate, Alibaba will rank among the biggest IPOs ever.

It’s not unusual for highly scrutinized companies to list an artificially low fundraising target when they first file IPO papers.

Facebook Inc., for instance, originally said it would raise $5 billion in its IPO before eventually bringing in more than three times that amount. That deal remains the technology industry’s largest IPO.

Although it’s not nearly as well-known as Facebook, Alibaba is an e-commerce powerhouse that makes more money than Amazon.com Inc. and eBay Inc. combined. What’s more, the company is still growing at a rapid clip as its network of online services, including Taobao, Tmall and Alipay, mine a Chinese Internet market that already has 618 million Web surfers, roughly twice the size of the U.S. population.

Last year, 231 million customers bought a total of $248 billion in merchandise on Alibaba’s e-commerce sites, according to the IPO documents. About $37 billion, or 15 percent, of that volume came through mobile devices.

The IPO will cast a spotlight on Alibaba’s improbable rise, as well as the promise of China’s steadily growing Internet market.

Alibaba started in 1999 with just $60,000 in the apartment of Jack Ma, a former English school teacher with no previous experience in business in technology. The company has since blossomed into a testament to China’s economic might, with earnings of $2.9 billion on revenue of nearly $6.5 billion through the first nine months of its last fiscal year ending in March. That topped the combined earnings of $2.4 billion posted during the same April-December stretch by eBay and Amazon last. Those two companies collectively had revenue of $71 billion during that period.

With Ma at the helm, Alibaba Group rebuffed a competitive threat after eBay entered into China’s market in 2002 and lined up a Yahoo investment that fortified the company’s position. Ebay abandoned the market in 2006 in a tacit admission of defeat.

Ma, 49, stepped down as Alibaba’s CEO a year ago when he was succeeded by Jonathan Lu. But Ma remains Alibaba’s executive chairman and still shapes the company’s strategy and entertains customers with songs and jokes when he takes the stage at the company’s annual “Alifest”. He is also a multibillionaire, based on his 8.9 percent stake in the company.

Alibaba’s success has provided a financial crutch for Yahoo Inc., whose 23 percent stake in the Chinese company is the main reason its own stock price has more than doubled in the past two years.

Yahoo is required to sell 208 million shares, or 40 percent of its Alibaba holdings, in the IPO as part of an agreement reached last year. The divestiture is expected to generate a windfall of more than $10 billion that will help define Yahoo CEO Marissa Mayer’s legacy at the Sunnyvale, California company. Yahoo paid $1 billion for its original stake in a 2005 deal engineered by two of Mayer’s frequently maligned predecessors, co-founder Jerry Yang and Terry Semel.

Mayer could distribute most of the Alibaba proceeds to Yahoo’s stockholders by paying dividends or buying back millions of the company’s shares. She primarily bought back Yahoo stock after the company reaped more than $7 billion from a 2012 sale of Alibaba stock.

Alternatively, Mayer could set aside some of the Alibaba money to finance an acquisition that would increase Yahoo’s audience and digital advertising sales. Mayer might be tempted to do something bold because she has been unable to boost Yahoo’s revenue during her nearly two-year reign.-Michael Liedtke with Joe McDonald in Beijing