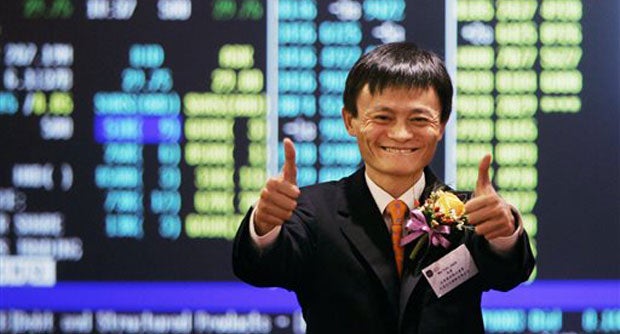 In this Nov. 6, 2007, file photo, Jack Ma, founder and CEO of Alibaba, celebrates at his company listing ceremony at the Hong Kong Stock Exchange. AP

SHANGHAI—After being knocked back by US venture capitalists in 1999, cash-strapped Chinese entrepreneur Jack Ma persuaded friends to give him $60,000 to start an e-commerce firm called Alibaba.

Fifteen years later the company is an Internet giant and Ma, a former English teacher, is among the topmost ranks of China’s super-rich with wealth estimated at $8.4 billion by Forbes magazine.

On Tuesday, Alibaba filed documents for a US stock listing, widely expected to be one of the largest offerings in history.

Analysts say the offer could raise around $15 billion, putting it on par with Facebook’s $16 billion IPO in 2012.

Ma, now 49, gave up his university teaching job after discovering the Internet.

Seeing an opportunity for small businesses to buy and sell their goods online, he started Alibaba, initially running the company out of his apartment in the eastern city of Hangzhou.

“The first time I used the Internet, I touched on the keyboard and I find ‘well, this is something I believe, it is something that is going to change the world and change China’,” Ma once told CNN.

A devotee of t’ai chi, he has made references to Chinese martial arts in both business strategy and corporate culture.

Porter Erisman, a former Alibaba employee who made a documentary about the firm, “Crocodile in the Yangtze”, said: “What Silicon Valley is known for, he embodies a lot of that with Chinese characteristics—that spirit of openness, risk-taking, innovation.”

Ma graduated from the Hangzhou Teachers’ Institute with a major in English-language education, and went on to teach at another university in the city, where Alibaba is still headquartered.

Chinese state media have burnished his rags-to-riches story, saying his parents were poorly educated and his father depended on a monthly retirement allowance of just $40 to support the family.

Ma’s success was evident after Alibaba’s Taobao bested eBay in China, forcing the US auction site to largely withdraw from the country in 2006.

Although he stepped down as Alibaba’s chief executive last year, Ma remains active within the company, providing strategic direction as chairman.

In characteristic language, he threw down a challenge to the world’s global Internet giants in a memo sent to the company’s more than 20,000 employees as it filed for the IPO.

“Fifteen years ago, Alibaba’s 18 founders were determined to set up a global Internet company originated by Chinese people, with hopes it would become one of the world’s top 10 Internet companies, a company which will exist for 102 years,” he said—a lifespan that would mean it lives across three different centuries.