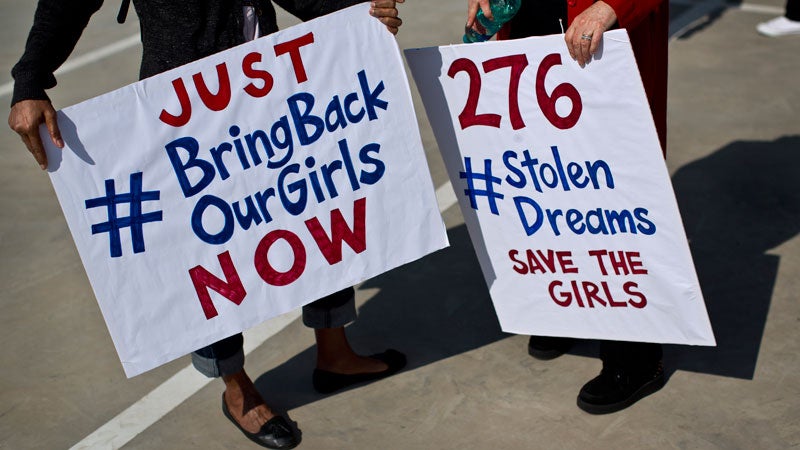 South Africans protest in solidarity against the abduction three weeks ago of hundreds of schoolgirls in Nigeria by the Muslim extremist group Boko Haram and what protesters said was the failure of the Nigerian government and international community to rescue them, during a march to the Nigerian Consulate in Johannesburg, South Africa Thursday, May 8, 2014. The kidnapping has ignited a viral social media campaign that has brought renewed attention to Boko Haram’s campaign of violence, and protests around the world. (AP Photo/Ben Curtis)

The hashtag appeared 412,000 times on Twitter on Thursday alone, more than any other day since the April 14 mass abduction, keeping the topic firmly on Twitter’s trending list throughout the day.

“Our prayers are with the missing Nigerian girls and their families. It’s time to #BringBackOurGirls,” wrote US First Lady Michelle Obama under a picture retweeted more than 48,000 times.

The biggest of several Bring Back Our Girls pages on Facebook attracted 94,000 likes, while a multilingual petition on Change.org urging world leaders to get involved sailed past 706,000 signatures.

On the official White House website, a petition calling on President Barack Obama to work with Nigeria and the United Nations to rescue the schoolgirls swelled to 21,000 names.

“This campaign has really exceeded my expectations,” said Hadiza Bala Usman, who has led protests in the schoolgirls’ hometown Chibok and helped spearhead the #bringbackourgirls campaign.

“We are at a point where Nigerians need to know that they have social media as a tool,” she told AFP. “You can’t suppress us. We have a voice.”

Since the crisis began, the #bringbackourgirls hashtag has appeared 1.8 million times on Twitter, according to Topsy.com, a social media analytics website — with 1.4 million of those tweets in the past week alone.

“One thing that makes this campaign unique is that it has activated people around the globe rather than just those who live in a certain region or speak the same language,” said Shelby Knox, a senior campaigner at Change.org.

Slow to jump on story

AFP first reported the kidnappings a day after they happened, but many Western news organizations were slow to jump on the story, overshadowed as it was by the South Korean ferry and Malaysia Airlines disasters.

The #bringbackourgirls hashtag originated within Nigeria — a sign of how pervasive social media has become in developing nations amid the rapid growth of Internet access and mobile devices.

Usman, concerned about “our silence on this terrible attack,” sent around an email to six friends, asking what could be done to raise awareness, she told AFP Lagos correspondent Benjamin Simon.

That led to the collective development of a “concept note” from which the slogan emerged. Former World Bank vice president Obiageli Ezekwesili was copied into the online discussion.

She proved helpful with contacts and visibility, and by sharing the hashtag with her 125,000 Twitter followers.

Besides raising awareness, however, it remains to be seen to what extent an online campaign can sway events on the ground, in a diverse nation of 168.8 million that few outside Africa know much about.

“This social media campaign in the rest of the world has forced the Nigerian government, the US government and the world’s media to pay attention,” said Lori Brown, a sociology professor at Meredith College in North Carolina.

Political scientist Chris Dolan, an expert on humanitarian intervention and human security at Lebanon Valley College in Pennsylvania, questioned how it would help the young captives who Boko Haram is threatening to sell as slaves.

“But I think it does diminish the Boko Haram cause. It demonstrates how brutal they are,” said Dolan, who underscored how social media enables young adults to engage on issues otherwise neglected by their traditional sources of information.

On the CompareAfrique.com, website co-founder Jumoke Balogun argued that the #bringbackourgirls campaign would give the US military “legitimacy to encroach and grow their military presence in Africa.”

And Nigerian writer Teju Cole drew a distinction between grassroots effort by Nigerians to democratically influence their own government and grand-standing and interference outsiders.

But at the University of Rochester in upstate New York, where students taking final exams donned head wraps or green and white clothing Thursday in solidarity with Nigeria, the role of social media was deemed critical.

“It kind of embarrasses the government of Nigeria to actually do something,” said Fayokemi Ogunmola, president of the university’s Pan-African Students’ Association. “Everybody knows where Nigeria is now.”