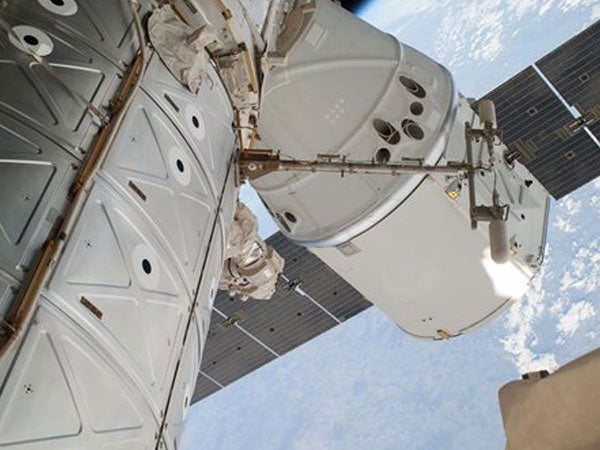 This April 22, 2014 file photo provided by NASA shows a photo of the SpaceX Dragon spacecraft docked to the International Space Station and was photographed by one of two spacewalking astronauts. On Sunday, May 18, 2014, after a one-month visit, the SpaceX cargo ship was for return to Earth. The astronauts released it using the International Space Station’s big robot arm. AP

CAPE CANAVERAL, Florida — The commercial cargo ship Dragon returned to Earth from the International Space Station on Sunday, bringing back nearly 2 tons of science experiments and old equipment for NASA.

After a one-month visit, the SpaceX cargo ship was set loose Sunday morning. Astronaut Steven Swanson, the station commander, released it using the big robot arm as the craft zoomed more than 260 miles above the South Pacific.

“Very nice to have a vehicle that can take your science, equipment and maybe someday even humans back to Earth,” Swanson told Mission Control.

The SpaceX Dragon is the only supply ship capable of returning items to Earth. The others burn up on re-entry. This was the fourth Dragon to bring back space station goods, with 3,500 pounds (1,600 kilograms) aboard; it came down off Mexico’s Baja California coast.

SpaceX also is competing for the right to ferry station astronauts, perhaps as early as 2017.

The Dragon rocketed to the space station on April 18 with a full load and arrived at the orbiting lab two days later.