Swipe right for Ms. Right: The rise of dating apps 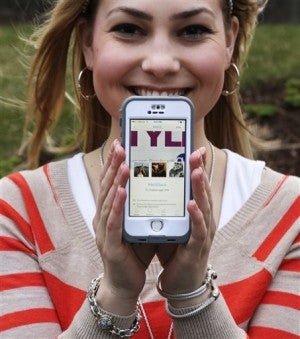 In this April 23, 2014 photo, Melissa Ellard poses showing her Hinge profile on her iPhone, in Foxborough, Mass. Ellard says she wouldnt have gone on a date in the past six months were it not for Hinge, a dating app whose promise hinges on its ability to hook you up with friends of friends. AP File Photo

NEW YORK — So, a lady walks into a bar…Wait, scratch that. A lady takes out her phone. With a left swipe of her finger she dismisses Alex, 25 and Robert, 48. She swipes right when a photo of James, 24, pops up. It’s a match. James had swiped right too. They chat, and make plans to meet. They’re only three miles apart, after all.

Welcome to the new world of dating. As the near-constant use of smartphones proliferates and as people grow more comfortable with disclosing their location, a new class of mobile dating applications is emerging that spans a range as broad as human desire itself. Millennials, busy with school, jobs and social lives, say the apps save time and let users filter out the undesirables, based on a few photos, words and Facebook connections. Unlike the dating websites of yore, with endless profiles to browse and lengthy messages to compose, newer apps offer a sense of immediacy and simplicity that in many ways harkens back to the good old days of just walking up to a pretty stranger and making small talk.

As with potential mates, there’s an array to choose from.

In the US, online community ChristianMingle will “find God’s match for you.” Mobile application Hinge’s promise hinges on its ability to hook you up with friends of friends. Coffee Meets Bagel, meanwhile, will present you with just one potential mate at noon every day. Dattch, with a Pinterest-like interface, is for women seeking women. For men looking for men, there’s Grindr, Jack’d, Scruff, Boyahoy and many more. Revealer will let you hear a person’s voice and only show photos if you’re both interested.

The darling dating app du jour for Americans is Tinder, helped by its simple interface, a host of celebrity users and a popularity boost from Sochi Olympic athletes who used it to hook up during the Winter Games.

Tinder, like many dating apps, requires people to log in using their Facebook profiles, which users say adds a certain level of trust. Facebook, after all, is built on knowing people’s real identities. Your Tinder photos are your Facebook photos. Users can reject or accept potential mates with a left or right swipe of their finger. If both people swipe right on Tinder, the app flashes “It’s a match!” and the pair can exchange messages.

Because messages can only come from a person you’ve “right-swiped,” unwanted advances are filtered out. The system avoids one of the more vexing problems of older-generation dating websites, where users, especially women, can become inundated with messages from unwelcome suitors. They also offer a generation raised on Google and social media a chance to do background checks on potential mates.

“If you are in a bar and a guy comes to talk to you, you are immediately going to be freaked out and you don’t want to talk to them because they are drunk,” says Melissa Ellard, 23, who uses Hinge and says she wouldn’t have gone on a date in the past six months were it not for the app. “When you are using the app, you get to look at their picture and see background information. You get to decide whether you want to continue it or not. When I meet someone, I want to know everything about them before I go on a date with them.”

While they are still new, dating apps — used for anything from one-night-stands to serious dating, and even finding new friends while traveling — are emerging as the use of older dating websites is moving into the mainstream. A recent Pew study found that some 9 percent of US adults say they’ve used dating sites or mobile dating apps, up from 3 percent in 2008. Of those who are “single and looking,” the number jumps to 38 percent, according to the 2013 survey. The crowd trends slightly younger, with the largest group of users between 25 and 44. Clearly, many people have grown comfortable with online dating just as they have with shopping, banking and booking travel over the Internet.

Cue the cries of “the lost art of courtship” and the “rise of hookup culture” from older generations, who harbor selective memories of the more analog hookup culture of their youth.

“There is a general digital fear,” says Glenn Platt, professor of interactive media studies at Miami University. “People are happy to giggle and watch Barney in ‘How I Met Your Mother” who hooks up with people based on looks. But somehow taking that same behavior and placing it in a digital context has a stigma attached to it. Even though, in that context you are more likely to get a better match, more information, a person’s real name.”

Even Facebook is getting in on the action, from a more platonic angle. Last month, the world’s biggest online social network launched a feature called “nearby friends,” which lets users see which of their Facebook friends are near them at any given moment.

Despite the growing acceptance, the online and app-based dating market is small. Research firm IBIS World estimates that the dating services industry will hit $2.2 billion in revenue this year. Internet conglomerate IAC/InteractiveCorp has the biggest chunk of the market with a 27 percent share. The New York Company owns traditional dating sites such as OKCupid, Match.com and Chemistry.com, as well as Tinder. IAC has a market value of just $5.2 billion, less than a third of Twitter’s.

Jared Fliesler, general partner at the venture capital fund Matrix Partners, believes companies have only just begun to tap into people’s willingness to “pay” to find love, a phenomenon that extends well beyond dating apps. After all, he points out, singles already spend lots of money on texts, calls, drinks, food, gifts and everything else associated with the dating game.

“Despite it being a slightly difficult category in which to rise venture funding, consumers spend more time, money, and mental energy on trying to find love than pretty much anything in life, and the desire to be loved is universal,” says Fliesler. “So there will always be demand.”

Creators of some of the more ambitious apps say they have their sights set beyond romantic matchmaking to what they call “social discovery,” helping people meet business connections, new friends while traveling or moving to a new city. Tinder’s co-founder, Justin Mateen, insists that his creation is not a hookup app and wasn’t created to facilitate one-night stands.

“I used Tinder before I found out about Hinge and it was creep central, it was just weird,” says Ellard, who lives outside Boston, runs a startup, works in jewelry sales and has a fashion radio segment. “I used it for a few months but instead of looking for someone it was more like a funny joke,” she says.

For some, though, Tinder can be liberating. Platt says the app “equalizes gender power,” and notes that he hears as many of his female students talk about it as male ones.

“Everyone has the same finger and ability to click,” he says. “It’s not like the guy buys the drink.”

Jenny Lewin, 21, a student of Platt’s who’s an intern at San Francisco-based Coffee Meets Bagel, thinks it’s inevitable that as dating apps enter the mainstream, they will become more accepted and people will be more open about using them.