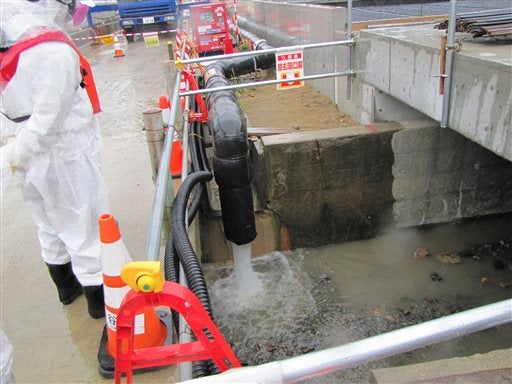 In this photo provided by Tokyo Electric Power Co. (TEPCO), underground water is being released into the ocean through a piping at Fukushima Dai-ichi nuclear plant in Okuma, Fukushima prefecture, northern Japan Wednesday, May 21, 2014. Japans crippled nuclear power plant has begun releasing groundwater from the least contaminated areas of the facility into the ocean so it does not run into contaminated areas and create more toxic water amid storage space limitations. AP

TOKYO— Japan’s crippled nuclear power plant has begun releasing groundwater from the least contaminated areas of the facility into the ocean so it does not run into contaminated areas and create more toxic water amid storage space limitations.

Wednesday’s release of 560 tons involves ground water pumped from 12 wells dug upstream of the damaged reactors at Fukushima Dai-ichi nuclear plant. The water, temporarily stored in a tank, has been deemed clean enough to pump into the ocean without treatment. The release of groundwater in a so-called “bypass system” is a key part of the plant’s contaminated water management as the volume of the water continues to grow.

The system had been delayed due to a series of problems involving contaminated water, including major leaks from storage tanks located near the pump-up wells for the bypass system, which have triggered concerns among local fishermen and residents.

The plant has significantly stabilized since the March 2011 meltdowns but the buildup of contaminated water at the facility is a major problem.

The plant’s operator, Tokyo Electric Power Co., and the government are also preparing to build a largely untested frozen underground wall around the four damaged reactors to isolate the area and block groundwater movement. TEPCO has been also building more tanks, including larger ones, to increase storage capacity.

But nuclear experts and officials say the space is running out and that the contaminated water must be eventually released into the sea after careful treatment and local consent, but that plan has met strong resistance from the public.

Plant chief Naohiro Masuda said in a statement that tackling the contaminated water problem is critical to the decommissioning of Fukushima Dai-ichi, which officials say would take decades. He promised to watch the safety and water quality in groundwater released to the sea.

TEPCO spokeswoman Mayumi Yoshida said the plant is continuing to pump groundwater but it’s temporarily stored in tanks. The timing of a next release is not decided.

If effective, the bypass system could reduce the amount of groundwater inflow by up to one-quarter of the current 400-ton daily increase.