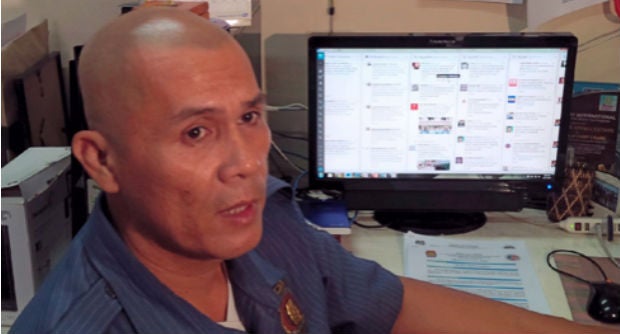 SPO1 Jonathan de Leon responds to a Twitter user who jokes about becoming a holdupper to be able to buy expensive concert tickets.

MANILA, Philippines–Wonder who’s behind the good-humored tweets of the @PNPHotline? They call themselves “cool cops.”

For its playful and spontaneous posts, the official Twitter handle of the Philippine National Police (PNP) has gained attention and popularity, with almost 16,000 followers and growing.

Managing the account is the Police Community Relations Group (PCRG) and its deputy director, Senior Superintendent Maria Asuncion Placino who, in an interview, described policemen in the PCRG as “cool” and down-to-earth.

“Here in PCRG, we were told to have a humane approach and humor (when it comes to responding to netizens on social media). Cool dapat kami,” Placino said, stressing the role of the PCRG in bringing the police closer to the community.

The account @PNPHotline encourages the public that policemen are only a text away through their Short Messaging Service (SMS) hotline 0917-847-5757.

She said every time they would answer queries of the netizens, they would imagine as if they were present physically.

“We deal with them on Twitter as if ‘kilalang kilala mo na talaga sila [as if you really know them],'” Placino said.

Working on two desktop computers, the “cool cops” handling the @PNPHotline account are around five policemen who take shifts daily, according to Placino.

Using an application called TweetDeck, the officer assigned segregates the tweets by keywords, such as “hold-up,” “snatcher, “chongke (slang term for Marijuana),” among others, making it easier for them to access crime-related posts.

“We can do our jobs even when we joke around and even better when we’re dead serious,” said Placino in Filipino.

Senior Police Officer 1 Jonathan de Leon, a senior duty officer at PCRG, said that the basic purpose of the account was to establish a relationship with the netizens who are mostly teenagers.

“If they joke with you on Twitter, play along with them. Here you need a sense of humor,” De Leon said. “Pulis tayo eh, kailangan cool [We’re cops so we need to be cool].”

Asked if their less serious responses may compromise their credibility as policemen, De Leon said they always made sure that the queries of the public were being attended to despite the playfulness.

“This is only to build rapport with the public but on the other hand, we have to be serious also,” he explained.

The officer said they wanted to educate especially the young ones to be “responsible people”.

In response to netizens questioning the legitimacy of the @PNPHotline account or even those wondering whether the handle has been hacked, Placino said a team from their office was formally created to monitor and manage the account 24 hours, seven days a week.

Placino said even some PNP non-uniformed personnel were supervised closely by an assigned police officer.

“We cannot allow others who are not policemen to post replies in our account. The responses really came from the police,” she said.

In a memorandum dated May 7 signed by Chief Superintendent Manuel Felix, Directorate for Police Community Relations (DPCR) chief, it said the humanized tweets of the @PNPHotline account was deliberately done to show netizens that the PNP was “present and ready to listen.”

“The added-value of the humanized tweets at @PNPHotline delight the netizens, especially teenagers, with a more engaging interaction and conversation with the PNP. It also contributes in building the rapport between the police and the netizens as it shapes the general public perception that the PNP is present and ready to listen to issues affecting peace and order,” it added.

It said the PNP’s official Twitter was also made to provide tweets on practical guidance with “a touch of humor to show them the lighter side of law enforcement.”

To tweet and protect: PNP chief debuts in social media