Apple dances to new tune with $3B Beats deal 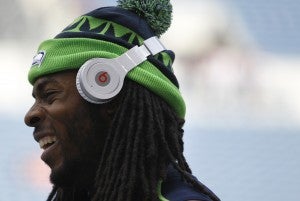 In this Aug. 17, 2013, photo, Seattle Seahawks’ Richard Sherman wears Beats headphones before a preseason NFL football game against the Denver Broncos, in Seattle. Apple’s $3 billion purchase of Beats Electronics, by far the company’s largest acquisition, is at least in part recognition that Beats founders Dr. Dre and Jimmy Iovine might be able to help Apple incorporate more style and flair into its premium technology gadgets—especially a coming wave of wearable devices. AP PHOTO/JOHN FROSCHAUER

WASHINGTON—If Wall Street struggles to see the logic in Apple’s $3-billion deal for Beats Music, it may look across the river to Brooklyn, hometown of Beats co-founder Jimmy Iovine.

The wild card in the deal could be Iovine, 61, a Brooklyn native and son of a longshoreman who started in the business by cleaning studios and later was a recording engineer for John Lennon and Bruce Springsteen, before becoming a producer.

“He is old-school. He didn’t come out of management school, but had music in his blood, and artists connect to that,” said the executive, who asked not to be identified.

Iovine, a producer for U2, Dire Straits, Stevie Nicks, Tom Petty and The Heartbreakers, and Patti Smith, is seen by some as a visionary for recognizing the trend of online streaming and subscriptions—and away from Apple’s model of purchasing individual songs on the Internet.

“The way to find out what’s really going on in music is to talk to record producers,” Iovine said in an interview at the 2013 Grammy Awards, where he was recognized for his contributions to the industry.

“They have their pulse on everything. They live in the recording studio. They have the feel of the artists.”

Iovine was key in helping persuade Apple chief Steve Jobs in 2002 to launch the iTunes store, according to several accounts of Apple’s history.

Yet for some, Apple’s tie-up with a company best known for its high-end headphones is a mismatch.

“The deal seems to be out of line with Apple’s history of acquisitions of technology, and we struggle to see the value,” said Bank of America-Merrill Lynch analyst Scott Craig in a research note.

The private company research firm PrivCo said in a research note that Apple might have been “starstruck” and as a result “is substantially overpaying” for Beats.

The analysis claims Beats is “practically a ‘virtual company’ with only a few dozen employees focused on a celebrity driven market” and “little to no original intellectual property.”

Other analysts see more harmony in the deal for Apple, a pioneer in digital music but which appears to have been overtaken by the successful models of streaming services like Pandora, Spotify and others.

The news comes after Spotify’s announcement that it had 40 million users, including 10 million paying customers, and Pandora had over 76 million listeners while leading the ad-supported model.

“In our view, the iTunes music strategy, which has been challenged recently, could benefit from the new hires,” Daryanani said in a note to clients.

“Notably, Iovine was one of the first industry executives to anticipate the download business decline and advocate for subscription and streaming services as music’s future.”

Trip Chowdhry, analyst with Global Equities Research, said Beats can help Apple improve its iTunes Radio, which he called “a total disaster” while Beats offers “one of the best streaming music experiences.”

He said that Beats has just 250,000 subscribers “but with Apple’s power in distribution (iOS devices and AppStore), subscription to Beats’ music streaming service can easily grow to 20 million subscribers within the next 12 to 18 months.”

Others say Beats could help Apple deliver wearable and smart-home products based on Beats designs.

“If Apple is buying Beats purely for its headphones or music subscription business, then Apple is making a mistake,” said Forrester Research analyst James McQuivey in a blog post.

“However, there are those of us who still believe that Apple hasn’t thrown in the towel. And why would it?” he said.

“There are still many consumer markets to dominate—entire markets like wearables and home automation tech and even in-car experiences… Apple still has the smarts, the brand and certainly the money to make a run for any of those things, if not all of them.”—Rob Lever