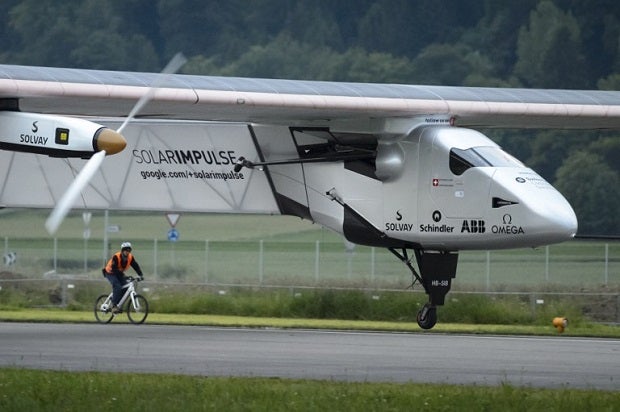 PAYERNE — A sun-powered plane made a successful test flight in Switzerland on Monday, clearing a vital hurdle towards its goal of a round-the-world trip next year, its pilot said.

Solar Impulse 2 carried out a flight lasting two hours and 15 minutes, half an hour longer than scheduled, he said.

“Of course, we have to do more testing, but it’s a good start and I’m looking forward to flying the airplane the next time,” he said.

It is the successor of Solar Impulse, a record-breaking craft that in 2010 notched up a 26-hour flight, proving its ability to store enough power during the day to keep flying at night.

The forerunner was put through its paces in Europe, crossed the Mediterranean to reach Morocco and traversed the United States last year without using a drop of fossil fuel.

The goal with Solar Impulse 2 is to fly non-stop for more than 120 hours — five days and five nights — enabling it to cross the Pacific and Atlantic on its global flight.

The operation will begin in the United Arab Emirates in March 2015 and circle the globe eastwards, making numerous stops on the way.

Solar plane to get inflatable hangar after Midwest storms