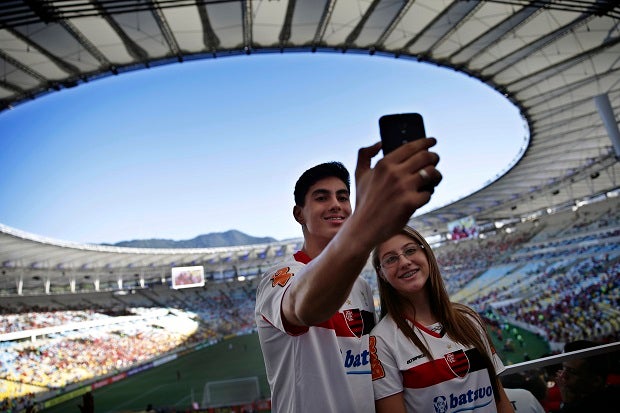 In this May 11, 2014 photo, a couple takes a selfie during the Brazilian league soccer match between Fluminense and Flamengo, at Maracana stadium in Rio de Janeiro, Brazil. Experts say Cup visitors will discover that Brazil’s mobile communications services are severely lacking, mostly because the government and telephone companies are ill-prepared for the month-long tournament. Some even worry about possible mobile network blackouts. AP

LONDON—Vodafone, one of the world’s largest cellphone companies, revealed the scope of government snooping into phone networks Friday, saying authorities in some countries are able to directly access an operator’s network without seeking permission.

The company outlined the details in a report that is described as the first of its kind, covering 29 countries in which it directly operates. It gives the most comprehensive look to date on how governments monitor the communications of their citizens.

The most explosive revelation was that in a small number of countries, authorities require direct access to an operator’s network — bypassing legal niceties like warrants. It did not name the countries.

“In those countries, Vodafone will not receive any form of demand for lawful interception access as the relevant agencies and authorities already have permanent access to customer communications via their own direct link,” the report said.

The report itself reflects the concern now being raised regarding privacy rights around the world. Though Vodafone is a global company, it consists of separate subsidiaries, all of which are subject to domestic laws of the countries in which it operates.

“The need for governments to balance their duty to protect the state and its citizens against their duty to protect individual privacy is now the focus of a significant global public debate,” the company said in the report. “We hope that … disclosures in this report will help inform that debate.”

The findings will heap anxiety on civil rights advocates already alarmed by the revelations of Edward Snowden, the former National Security Agency systems administrator whose leaks have exposed some of the agency’s most sensitive spying operations.

Shami Chakrabarti, the director of the human rights group Liberty, described the findings as a worst-case scenario infringement into civil rights.

“For governments to access phone calls at the flick of a switch is unprecedented and terrifying,” Chakrabarti said in a statement, adding that the Snowden revelations showed the Internet was already being treated as “fair game.”

“Bluster that all is well is wearing pretty thin – our analogue laws need a digital overhaul,” she said.

Another flight mystery: Why no cell phone calls?