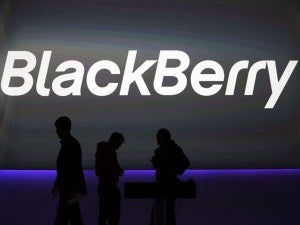 MONTREAL, Canada–Canadian smartphone maker BlackBerry, under new leadership, announced a small profit in a surprising turnaround on Thursday, despite a huge drop in revenues.

The Waterloo, Ontario-based company reported a slight profit of $23 million in its fiscal first quarter ended May 31, following back-to-back losses.

Quarterly revenue, however, fell to $966 million from $3.07 billion a year ago. This was also down from the previous quarter.

The figures do not include exceptional items such as the sale of its offices and a change in the assessed fair value of millions of dollars in debentures.

Excluding these items, BlackBerry’s adjusted loss was $60 million or 11 cents per share. But even this adjusted loss is still less than half the level that analysts had expected.

Chief executive John Chen said the results demonstrate “that we are firmly on track to achieve important milestones, including our financial objectives.”

“Over the past six months, we have focused on improving efficiency in all aspects of our operations to drive cost reductions and margin improvement. Looking forward, we are focusing on our growth plan to enable our return to profitability,” he said.

BlackBerry helped create a culture of mobile users glued to smartphones, but lost its luster as many moved to iPhones or devices using Google’s Android software.

After posting record losses last year, the company brought in new management and outsourced its handset production to Taiwan-based Foxconn.

BlackBerry said it sold 2.6 million smartphones in the last quarter. Hardware sales accounted for 39 percent of its revenues, while services grew to 54 percent. The remainder came from software and other sources.