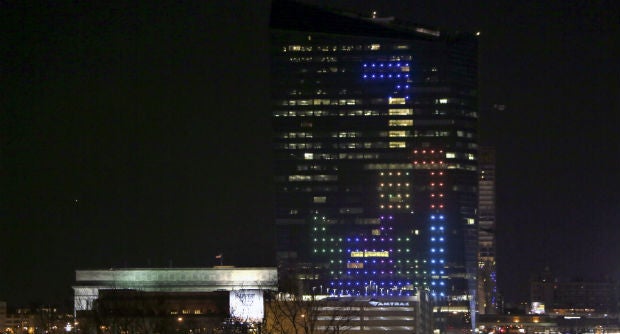 In this April 5, 2014 file photo shown is the classic video game Tetris played on the 29-story Cira Centre in Philadelphia, April 5, 2014, using hundreds of LED lights embedded in its glass facade. The spectacle kicks off a citywide series of events called Philly Tech Week and also celebrates the upcoming 30th anniversary of Tetris. AP

PHILADELPHIA — All the pieces have fallen into place for the designer of a giant Tetris game.

Lee and two colleagues created a computer program to play the classic shape-fitting puzzle on two sides of a 29-story skyscraper in Philadelphia.

They used hundreds of lights embedded in the glass facades of the Cira Centre. All told, the “screens” totaled nearly 120,000 square feet (11,000 square meters).

Dozens of Tetris enthusiasts played the supersized version in April using a joystick from about a mile (2 kilometers) away.

The record announced Tuesday beat the previous one also set by Lee. Last year, he recreated the classic Atari game Pong on a side of the same building.