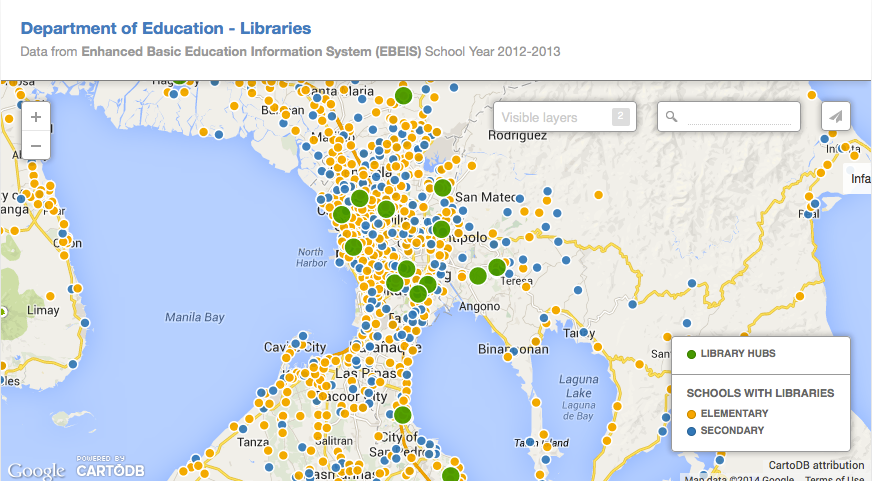 The Department of Education has a solution: Check its online library locator map.

The map, which one may access via the DepEd website (www.deped.gov.ph), shows almost all the libraries in public elementary and secondary schools, and the reading centers known as library hubs, in the country.

The DepEd formally launched the online tool on Friday.

“Each child should (be able) to open a book and continue reading,” Education Secretary Armin Luistro said in a statement.

He added that knowing the location of a reading area “would help every child to foster love for reading.”

A check showed that the online tool, which is hosted by CartoDB, basically consists of an ordinary map of the country, on which green, orange and blue dots are interspersed.

A click on any green dot will give the online user two things: the address of the library hub that green dot represents (for example, “DepEd Division of Rizal, Cabrera Road, Hilltop, Taytay, Rizal”); and  the region in which that library hub is located (for example, “Region 4B”).

According to the DepEd, “almost 9,000” of the 9,855 registered public schools with libraries have been included on the map, which can be zoomed in and out by the online user anytime.

The agency added there are at present 188 library hubs nationwide, although it was unclear whether all these hubs were already included on the map.

He said if a child was given better access to libraries, he would be able to read and therefore improve the skills that are necessary for him to express himself.

“Our… goal is to help every graduate to write his or her own story, a story that is welling up in his or his heart,” he said.

Feedback on how to improve the data in the library locator map may be sent to [email protected].