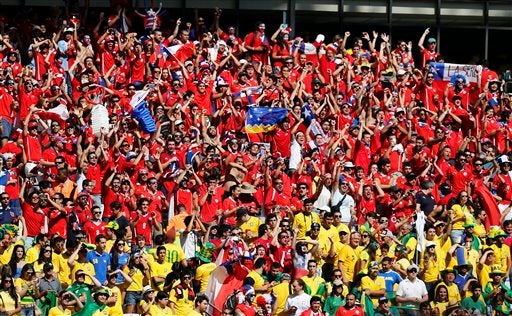 Chile’s fans, top, cheer next to Brazil’s fans, bottom, before the World Cup round of 16 soccer match between Brazil and Chile at the Mineirao Stadium in Belo Horizonte, Brazil, Saturday, June 28, 2014. AP

PARIS — A record 16.3 million tweets were sent during Saturday’s World Cup game between Brazil and Chile, the most ever for a live event on the social network.

The game saw the World Cup hosts go through to the quarter finals after a nail-biting encounter that went to extra time, with Brazil finally winning 3-2 in the penalty shoot-out.

The final moments of the match — which saw Chile miss their final penalty — generated 388,985 tweets a minute, Twitter told AFP.

This broke a record previously set during the Super Bowl, when 382,000 tweets were sent per minute.

Unsurprisingly, Brazilian striker Neymar, who scored the team’s final penalty, was the player mentioned most frequently on the site during the game.

Twitter said on Friday that more than 300 million messages had been sent about the tournament since the group stages of the football competition began, with the event “already becoming one of the most talked about events on Twitter of all time.”

Before Saturday, the record for the most-commented-on match on the network was that between Brazil and Croatia on June 12, which saw 12.2 million messages sent.