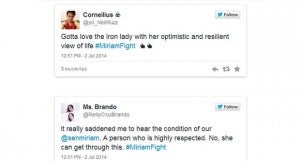 The hashtag #MiriamFight became a trending topic nationwide after Santiago disclosed her cancer.

A netizen said he felt so affected by Santiago’s illness that he cried when he read the announcement on social media:

A Twitter user who used the name Bad Engineer wondered why Santiago coursed her announcement via Twitter, posting, “A lady who announces her Lung Cancer over at Twitter and cracks a joke over it has to be a strong hearted lady. #MiriamFight”

“We could have used the pork money to research for a possible cure of cancer. Too bad our legislative body chose to do the evil,” Johnny said on Inquirer.net.

“I’ve seen kids with cancer sa PGH and it’s not a pleasant spectacle. I’m sure makaka-relate ka sa kanila, the psychological and physical pain their parents are going through right now,” the lobbyist said.–Reports from Ramon H. Royandoyan and Denison Rey Dalupang