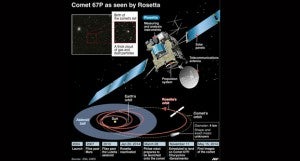 Illustration of comet-seeker Rosetta with details of its progress (130 x 140mm). AFP

BERLIN  — A comet-chasing spacecraft on a mission to land on a fizzing ball of ice and dust later this year has begun a crucial slow-down maneuver to avoid flying past its target.

The European Space Agency says the Rosetta probe is firing its thrusters to cut by almost two thirds the speed with which it’s hurtling toward comet 67P/Churyumov-Gerasimenko.

The agency says Wednesday’s burn is the first of four before Rosetta comes within 100 kilometers (62 miles) of the comet in early August, beyond the orbit of Mars. The final rendezvous requires two more precision maneuvers.

The probe, launched a decade ago, will spend time observing 67P before dropping a lander onto its icy surface in November.

The comet is about four kilometers long and orbits the Sun every six-and-a-half years.