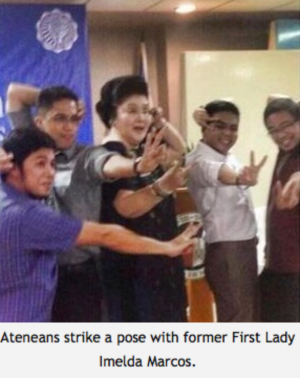 MANILA, Philippines – Some people lauded the act, but others remained disappointed after Ateneo de Manila University (ADMU) issued an “apology” on former first lady and Ilocos Norte congresswoman Imelda Marcos’ presence at an event held in the university.

“I don’t think you realize the gravity of your ‘socialization’ with Imelda,” said one Facebook user who commented on the letter written by ADMU President Jose Ramon Villarin, SJ.

“Everywhere in the Internet, Marcos propagandists are working 24/7 in trying to erase the memory of Marcos’ crimes from the consciousness of everyone, and preach the false gospel that Marcos was the best thing that ever happened to this country, and to a certain extent they are succeeding…Not even a hundred repentant memos released to the social media can remedy that now,” the commenter said.

Meanwhile, another posted, “Very good point Fr. Jett in anticipation of public criticisms that, once not clarified early, [become] viral with lots of malicious interpretations and comments from the (social) netizens. Hope other institutions and public figures especially from the church that are sensitive in nature will follow your actions to avoid controversy. A (one) picture speaks a thousand words but it always [leads] to bad presumptions.”

Marcos was among the guests at the Ateneo Scholarship Foundation’s 40th Anniversary. Photos of her and Villarin, as well as the scholars, spread online, drawing criticism from many Filipinos.

One photo showed students posing with Marcos while flashing the “V” sign, a gesture often made by deceased strongman Ferdinand Marcos.

Villarin was quick to allay negative perceptions, saying, “I apologize for any doubts that may have arisen on the mission of the school and the pain this event may have caused.”

“As I hope for your understanding, I would like to assure you that we in the administration have learned our lesson to be more mindful of those we invited to our celebrations,” he said. “More importantly, I would like to reaffirm that we have not forgotten the darkness of those years of dictatorship and that we will not compromise on our principles in forming those who would lead this nation.”

Villarin explained that the Ateneo Scholarship Foundation was not an official school arm and that Marcos was invited because she was a key figure in its first fundraising activity in 1974.

He said that “in spite of the visit of Mrs. Marcos, the evening was really a celebration of our scholars, the foundation’s scholarship programs, and the generosity of countless benefactors over the last 40 years.”

But many netizens said Filipinos should “never forget” the human rights violations and other atrocities done during the Marcos dictatorship.

Some reminded the young generations of Edgar Jopson, an Ateneo student who became a famous activist during the martial law era. At the height of political unrest, Jopson went underground and was killed during a military raid of a safehouse.

I see a Marcos running for the presidency—Imelda