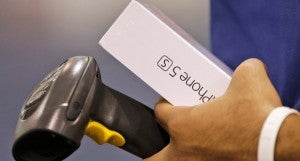 In this Friday, Sept. 20, 2013, file photo, a Best Buy employee prepares to scan a new iPhone 5S during the opening day of sales of the new phone in Richmond, Va. AP

BEIJING—Chinese state broadcaster CCTV has accused US technology giant Apple of threatening national security through its iPhone’s ability to track and time-stamp a user’s location.

The “frequent locations” function, which can be switched on or off by users, could be used to gather “extremely sensitive data”, and even state secrets, said Ma Ding, director of the Institute for Security of the Internet at People’s Public Security University in Beijing.

The tool gathers information about the areas a user visits most often, partly to improve travel advice.

In an interview broadcast Friday, Ma gave the example of a journalist being tracked by the software as a demonstration of her fears over privacy.

“One can deduce places he visited, the sites where he conducted interviews, and you can even see the topics which he is working on: political and economic,” she said.

The frequent locations function is available on iOS 7, the operating system used by the current generation of iPhones released in September 2013.

“CCTV has only just discovered this?” said one incredulous Chinese microblogger.

The dispute is not the first time Apple has been embroiled in controversy in China, where its products are growing in popularity in a marketplace dominated by smartphones running Google’s Android operating system.

Apple lost a lawsuit against a Chinese state regulator over patent rights to voice recognition software such as the iPhone’s “Siri” just this week.

In March 2013 the Californian company was notably the target of criticism orchestrated by the Chinese media on behalf of consumers, who were critical of poor after-sales service.

And in 2012 the US firm paid $60 million to settle a dispute with another Chinese firm over the iPad trademark.

The privacy scare also reflects mutual distrust between the US and China after a series of allegations from both sides on the extent of cyber-espionage.

Leaks by former US government contractor Edward Snowden have alleged widespread US snooping on China, and this month it was reported Chinese hackers had penetrated computer networks containing personal information on US federal employees.

Apple did not immediately respond when contacted by Agence France-Presse for comment.