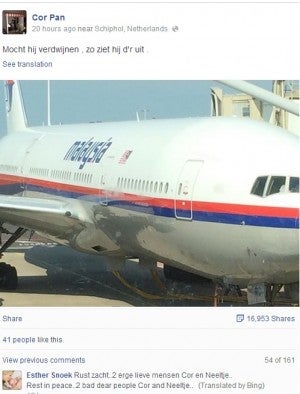 “If it disappears, this is what it looks like,” Cor Pan, one of the Dutch passengers aboard MH17 that was shot down on Thursday, posted on his Facebook account accompanied with a photo of the plane before it took off.

All 298 individuals on the Malaysian jet bound for Kuala Lumpur from Amsterdam died in the crash at Ukraine. About 154 of the passengers were Dutch nationals.

He posted the photo about “20 hours ago from Schiphol, Amsterdam.”

Authorities said the plane took off from Schiphol airport in Amsterdam shortly after noon of Thursday.

As Pan uploaded the supposed MH17 photo, his friends wished him and Neeltje Tol whom he claimed in his account to be “in a relationship with” “happy holidays” in Dutch.

But as soon as reports came in that the Malaysia Airlines plane Pan reportedly boarded crashed, people started to flood the post with questions confirming his flight number.

Early Friday, authorities confirmed that flight MH17 was the Boeing 777-200ER plane from Amsterdam that went down over Eastern Ukraine.

It was then that Pan’s friends began posting “Rest in Peace” on the thread.

MH17 was shot down by a surface-to-air missile. However, authorities cannot confirm whether Ukrainian rebels had launched the attack.

298 on board crashed Malaysian flight—airline

Initial breakdown of passengers’ nationalities on board MH-17:

Malaysia plane shot down over Ukraine; 3 Filipinos among passengers