Britain to trial driverless cars from 2015 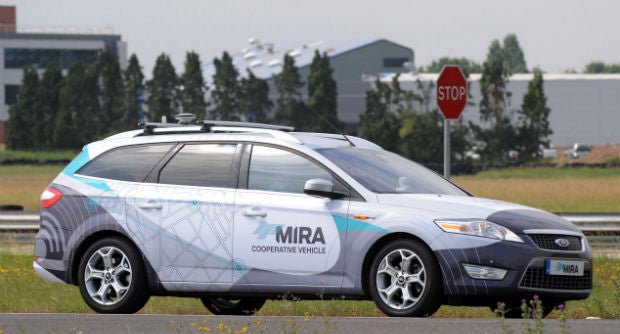 A driverless car during testing at the headquarters of motor industry research organization MIRA at Nuneaton in the West Midlands, England, Wednesday, July 30, 2014. AP

LONDON–Driverless cars will be allowed on British roads from January 2015 as part of a pilot initiative in three cities, the government announced Wednesday.

Cities nationwide are being invited to bid to host one of a series of trials that will last between 18 and 36 months, and to receive a share of the £10 million ($17 million, 12.5 million euros) of government funding for the scheme.

Driverless vehicles, guided by a system of sensors and cameras, have already been tested in several countries, including the United States and Japan, with Sweden set to follow.

Business Secretary Vince Cable, outlining the plans, said British scientists and engineers were “pioneers” in the development of driverless vehicles.

“Today’s announcement will see driverless cars take to our streets in less than six months, putting us at the forefront of this transformational technology and opening up new opportunities for our economy and society,” he said at the headquarters of motor industry research organisation MIRA in Nuneaton, central England.

However, motoring organizations warned that road users were skeptical of the technology.

The Automobile Association said a recent survey of more than 23,000 of its members showed that 43 percent did not agree that the law should be changed to allow trials of the technology.

AA president Edmund King said drivers were “still resistant to change” and that many people “enjoy driving too much to ever want the vehicle to take over from them.”

Another motoring association, the RAC, said it would be difficult for drivers to give up control of their vehicles.

RAC technical director David Bizley said: “Many vehicles already have features such as automatic braking and it is claimed that driverless technology is able to identify hazards more effectively than a person can.

“But many motorists will be concerned about not being able to control the speed of their vehicle for the conditions or layout of the road in front of them,” he added.