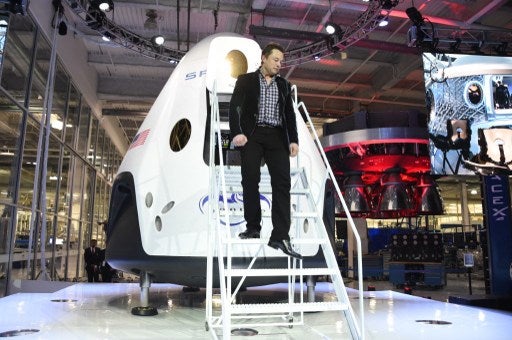 PARIS – With spacecraft that can carry tourists into orbit and connect Paris to New York in less than two hours, the new heroes of space travel are not astronauts but daring captains of industry.

This new breed of space pioneers are all using private money to push the final frontier as government space programs fall away.

Times have changed. Once the space race was led by the likes of the US space agency NASA that put the first man on the moon in 1969.

Today it is entrepreneur Elon Musk – the founder of Tesla electric cars and space exploration company SpaceX – who wants to reach Mars in the 2020s.

The furthest advanced – and most highly-publicized – private space project is led by Richard Branson, the British founder of the Virgin Group.

His shuttle, SpaceShipTwo, will be launched at high altitude from a weird-looking four-engined mothership – which can carry two pilots and up to six passengers – before embarking on a three-hour suborbital flight.

Branson and his sons will be the first passengers aboard the shuttle when it is expected to launch later this year.

His company Virgin Galactic was given the green light in May by the US Federal Aviation Agency (FAA) to carry passengers from a base in New Mexico, which is named “Spaceport America” – the stuff of science fiction.

The $250,000 (190,000 euro) price of a ticket has not deterred more than 600 people, including celebrities such as actor Leonardo DiCaprio, from booking their seats.

The US spaceflight company XCOR is more affordable, offering a one-hour suborbital flight for $100,000 (74,000 euros) on a shuttle that takes off from the Mojave Desert in California. It has already sold nearly 300 tickets.

It plans four flights a day and hopes its frequency will eventually give it an edge on Virgin Galactic.

But the new space business is not just about pandering to the whims of the rich, it also hopes to address a market for launching smaller satellites that weigh less than 250 kilograms (550 pounds).

“There is no dedicated launcher for small satellites,” said Rachel Villain of Euroconsult, a global consulting firm specializing in space markets.

“Everyone has been looking for years for the Holy Grail of how to reduce costs, other than to send them as passengers on big launchers.”

“These new players are revolutionizing the launch market,” said aeronautical expert Philippe Boissat of consultants Deloitte. “They are smarter, cheaper, and they are reusable and don’t leave debris in space.”

Which is exactly what one newcomer, Swiss Space Systems, or S3, proposes. With a shuttle on the back of an Airbus A300, its founder Pascal Jaussi wants to start launching satellites before going into intercontinental passenger flights.

The 37-year-old former test pilot claims he can cut the price of a 250-kilogram satellite launch to eight million euros (almost $11 million), a quarter of what it now costs.

“Satellite makers wanting to launch groups of weather and surveillance satellites have already filled our order books,” he said.

The first test flights are planned for the end of 2017, and the first satellite launches will begin at the end of the following year from a base in the Canary Islands, the Spanish archipelago off northwest Africa.

For passenger travel, the new space companies have to be passed by the regulators who currently control air travel.

At the moment a passenger plane covers the 5,800 kilometers (3,600 miles) between Paris and New York in seven hours. At Mach3 speed, the S3 shuttle will do the same trip in one-and-a-half hours.

Boissat of Deloitte is already looking further ahead.

“These suborbital flights will produce a new generation of fighter pilots at the controls of space shuttles sent up to protect satellites or neutralize ones that pose a threat,” he predicted.