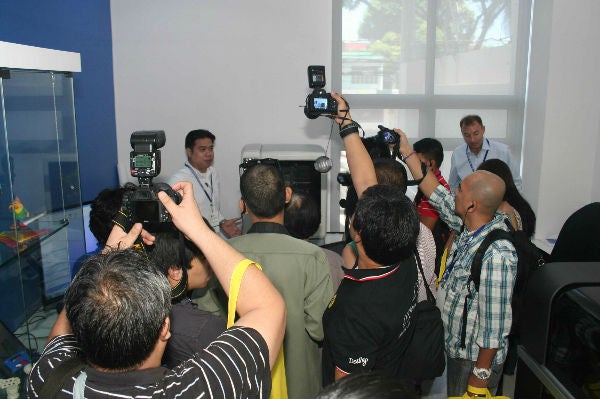 Sealing the summit’s final day on June 28 was an exhibition where participants were introduced to a plethora of Norde’s cutting-edge printing technologies, the highlight being the Stratasys 3D Printer, the first of its kind in the Philippines.

Designed for mass production processes, the Stratasys 3D Printer is equipped with an innovative scanning device that captures 100 percent-accurate images from digital files or 3D models. If desired, customizations can be carried out using the device. The printer then rebuilds the object layer by layer, followed by the actual reproduction. The machine can produce anywhere from one to one million copies of any object for only half the time – even less – required by conventional printers.

Built to quickly produce 3D replicas with greater meticulousness and customization, Norde’s 3D printing solutions eliminate the challenges associated with traditional printing. With the latter, designs and measurements must be created manually from scratch, followed by actual mold construction and printing. Investments in labor, resources and time are expensive, and errors, likely.

With 3D printing, everything is completed digitally including customization, thus allowing better design freedom and speeding up the entire process without consuming valuable resources.

Another emphasized advantage of 3D printing is its eco-friendliness. In contrast to traditional printers, digital printers utilize UV and latex inks which are considered safer for humans and more environmentally sustainable than the oft-used solvent inks.  In addition, such printers offer greater precision, allowing infinite reproduction of prints or 3D models on any material or surface – even on cabinets and doors – without a tangible pre-existing mold. This means little to no wastage or unnecessary consumption of environmental resources like paper.

As a prime printing technology, the benefits of this new 3D innovation encompass graphic and decorative. Elsewhere in the world, such printers are widely used in the fields of dentistry, medicine, film and creative art, jewelry and crafts, and large-scale manufacturing. In some countries, 3D printers have also successfully created permanent skin tattoos on humans.

Web-based companies and ventures that necessitate the use digital media channels also achieve enormous advantages from 3D printing. Tim Klappe, Managing Director for Norde, explains:  “You can tailor fit or personalize your promotional materials with QR codes that can bring clients to your Web site or social media page.  So, you require 200 unique materials that can’t be done on an analogue printer.”

With its robust and results-driven features, 3D printers permit instantaneous multiple prototyping of special structures – from dental fixtures to prosthetic limbs to toys and costumes – where direly needed.

Implications on the Philippine market

While already gaining ground in Western and select Southeast Asian markets, 3D printing is a fresh concept in the Philippines. According to Norde International executives, the introduction of 3D printing technology in the country is expected to revolutionize the way manufacturers, retailers, designers and engineers conduct business by increasing productivity and creativity, decreasing expenditure, and expanding their reach on a global level.

“With the capabilities of the technology we have this year, the possibilities in transforming concepts to concrete products are endless. We are truly excited   to share how these technologies will allow them to compete better – not just locally but globally as well,” said President Allan Hao Chin.

Further, the company intends to integrate specific platforms where businesses and engaged individuals can participate in active discussions on how to best maximize the features of such additive manufacturing solutions.

He adds, “If we are able to ride this wave, we can turn revolutionary ideas into reality. This will change how business is being done, especially in inventory management.”

With its advanced printing systems in laser, latex, format, industrial, garment and portable scanners and printers, and ironclad collaborations with the regions’ top technology experts, Norde International Distributors is uniquely positioned to lead Philippine businesses in making the full-fledged transition from analogue to digital – and in entering a new era in business technology where advancements inspire change and grow businesses to new heights.

For more information on Norde International Distributors, visit their official website at www.norde.com.ph.