New Samsung phone with side display in time for holidays 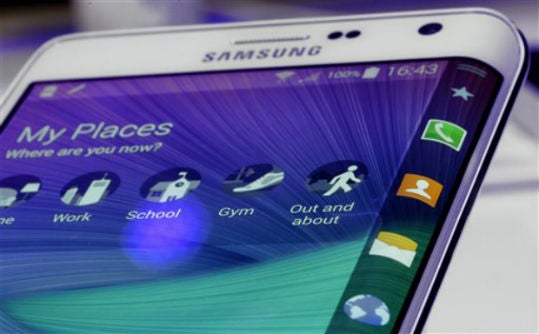 The curved display of a Samsung Galaxy Note edge is pictured during an ‘Unpacked event’ at the IFA, one of the world’s largest trade fairs for consumer electronics and electrical home appliances in Berlin, Germany, Wednesday, Sept. 3, 2014. AP

BERLIN—Samsung’s new smartphones aren’t getting bigger, but one will have a side display for quick access to the flashlight, Twitter, news and frequently used apps.

The Galaxy Note Edge was announced at a trade show in Berlin on Wednesday, alongside the new Galaxy Note 4 phone, which lacks the side screen, and a virtual-reality headset called Gear VR. They are due for release in October—in time for holiday shopping—and aim to compete with Apple’s new iPhones due to be unveiled next week.

The Edge uses Samsung’s flexible-display technology, which came out with much fanfare last year but has seen little use beyond a phone and a fitness device with displays that were slightly curved.

With the Edge, Samsung is offering a practical use for the curvature. While the main screen remains flat like previous phones, the right edge extends and curves until it reaches the back. That creates a side display so information such as weather and time can be seen from the side when the phone is laid on a table or nightstand.

With the side display, the phone’s camera functions more like a stand-alone, point-and-shoot camera, as the shutter button and other functions appear on top when the phone is held horizontally.

The side display also provides one-tap access to various apps normally found on the home screen. It will also have a panel of tools, like the flashlight and stopwatch, akin to what Apple offers in the iPhone’s Control Center with a swipe up from the bottom. Samsung will look to app developers to find new ways to use the feature.

Samsung didn’t announce prices. In the US, last year’s Galaxy Note 3 went for about $700 without a contract, or $300 with one. Prices are likely to be similar when the Note 4 comes out in October through all four national carriers in the US. The Edge will likely cost more.

Analysts said the new display feature could cut both ways.

“An edge-based display will give Samsung’s smartphone clear differentiation in a crowded market,” said Ian Fogg, an analyst covering the mobile industry at IHS in London. “But for Samsung to maximize the potential of an edge display it needs third party apps to support the display with additional Samsung-specific functions,” he said.

If the South Korean giant wants to avoid paying developers to kickstart the development of such apps, it might have to make the feature standard across its broad smartphone portfolio, said Fogg.

Samsung made the announcements at the IFA trade show, one of the world’s longest-running showcases for consumer electronics and home appliances.

The new phones were announced amid expectations that Apple will unveil new iPhones next week. The iPhone 6 is expected to feature a 4.7-inch screen, up from the current 4 inches, to make it more competitive with larger smartphones made by Samsung and other companies. There has been speculation that Apple may also unveil an iPhone with a 5.5-inch screen.

Samsung’s Galaxy S5, which came out in April, has a 5.1-inch screen. The Note is Samsung’s line of larger phones and emphasizes note-taking with an included stylus. The Note 4 will have a 5.7-inch screen, while the Edge’s will be 5.6 inches. To support such power-hungry large screens, Samsung says it has improved battery life.

The new models will have a 16 megapixel rear camera and 3.7 megapixels on the front. The front camera will be able to take sharper selfies than the typical camera phone. It will also have a wide-angle feature to fit more people into selfies by stitching multiple images together.

Meanwhile, Samsung will sell the Gear VR headset for about $200 as a companion to the Note 4. It won’t work with the Edge or other phones. The Note 4 attaches to the headset, which has sensors to gauge the head’s position and tells the phone which part of a 360-degree image to display. It can be used to give people an immersive experience with concerts, aerial footage and games.

But video and other content will need to be adapted for the device. Samsung says it expects to have content partnerships in place by the time the device goes on sale.–Frank Jordans with Anick Jesdanun in New York