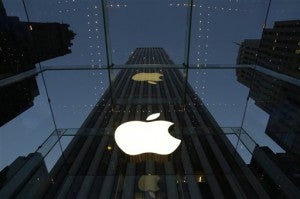 SAN FRANCISCO – It is a marketing strategy that few experts would recommend and even fewer companies can pull off.

But the less Apple says about its eagerly anticipated event on Tuesday at a performing arts center in Silicon Valley, the more frenzied the speculation becomes.

In keeping with its style, Apple has revealed little about what is expected to be the unveiling of the company’s first “big thing” since the death of legendary co-founder and driving force Steve Jobs nearly three years ago.

Invitations sent out to a select crowd had only the date and the cryptic message: “Wish we could say more.”

Apple is a proven master of getting more attention by saying nothing than most companies do by pouring money into marketing campaigns.

As long as Apple keeps cranking out must-have devices, silence and selectivity should remain potent weapons in its marketing arsenal, experts say.

“There is the culture of secrecy, which fuels a lot of speculation about what they might be doing,” Reticle Research principal analyst Ross Rubin said.

“And there is this expectation that the products they introduce are going to change the game. Backing it up is a really incredible track record dating back to the Apple II (computer).”

The strategy of letting rumor mills crank up expectations puts pressure on Apple to repeatedly wow the world – or risk having events branded as disappointments.

But Apple has been known to reach out behind the scenes to temper grandly unrealistic speculation.

Apple is even seen as becoming slightly more open after the departure in May of Katie Cotton, a communications executive who firmly managed the company’s precious image.

In the past two weeks, traditionally taciturn Apple was quick to release statements after hackers swiped nude photos of celebrities from iCloud accounts and in response to a report critical of one of its suppliers in China.

Some say that Apple’s inclination to lock secrets behind its campus walls stretches back to when Jobs in 1997 returned to the helm of a company that was on the ropes with the world ready to count it out.

A pair of longtime Apple engineers once suggested to AFP that the marketing technique stemmed from Zen Buddhism studied by Jobs, and the notion that media attention is naturally compelled to fill the void left by the company remaining mum.

The practice has been a winner for Apple. No venue seems big enough for its launch events, and it grabs headlines in weeks leading up to and following announcements.

Reasons that Apple thrives while being aloof include the technology titan’s focus on doing a few products amazingly well, while controlling everything from hardware to operating software and content.

Apple even started making its own chips for mobile devices.

And it dares to shake things up with dramatic changes, like dumping smartphone keyboards in favor of touch screens, according to Rubin.

“In contrast to many other companies, Apple is not afraid to leave the past and legacy technologies behind,” the analyst said.

Apple is also carefully calculating when it comes to entering new markets. There have typically been five or so years between new “big things.”

“There is so much anticipation because Apple doesn’t enter a new product category every day,” Rubin said.

“They take their time with the intention of getting it right with the first try.”

Among products Apple got right is the iPhone, which has become the company’s main money maker.

Apple profit climbed in the second quarter of this year with strong demand for iPhones, particularly in China, where the company’s revenue surged.

Apple said it sold 35.2 million iPhones in the quarter, a rise of nearly 13 percent from the same period a year earlier.

“As long as they have hits, they can do no wrong,” analyst Rob Enderle of Enderle Group in Silicon Valley said.

Rampant speculation about what Apple may have in store on Tuesday includes larger screen iPhones to ride a “phablet” trend, along with an “iWatch” that taps into the capabilities of iPhones and iPads.

Expectations have been pumped up even more – if that were possible – by the fact that the event will be held at the same arts center near Apple headquarters where Jobs introduced the Macintosh computer 30 years ago.