‘Anti-selfie’ bill fails to click in House, is sent back to committee 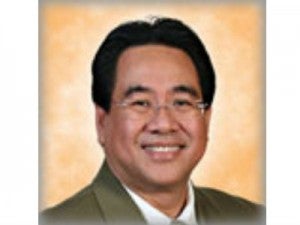 Cagayan de Oro Rep. Rufus Rodriguez: Back to square one. Photo from congress.gov.ph/

MANILA,Philippines–A proposed measure dubbed the “anti-selfie bill” and which seeks to protect private persons from intrusive cameras has lost support in the House of Representatives following stiff opposition from the media.

On Wednesday, House Bill No. 4807, which was on the verge of passage on third reading, was sent back to the public information committee for further deliberation.

Almonte said he was withdrawing as one of the six coauthors of HB 4807, the Protection against Personal Intrusion Act, to ensure an “impartial discussion” on its merits in the committee.

He explained that his coauthorship of the measure had been automatic after the committee finished its report on the bill.

Another coauthor, Pangasinan Rep. Leopoldo Bataoil, had also withdrawn support for the bill.

Almonte said the bill would take a back seat to more pressing House matters, including the 2015 national budget, the freedom of information bill and the Bangsamoro Basic Law.

Rodriguez said he did not mind the two withdrawals but admitted the measure would have an uphill climb back to the plenary floor.

Even so, he said, he hoped discussions would continue on his proposal, particularly its original intent.

Originally the bill sought to prohibit the taking of pictures for profit of private persons in their private moments, including trespassing onto their property and using zoom lenses on their cameras to capture such images.

But the final version of the measure that made it to the plenary would punish “any person who willfully intrudes into the personal privacy of another, without the consent of that person and with intent to gain or profit therefrom.”

Intrusions into privacy, according to the bill, include taking pictures, videos or sound recordings of another person, trespassing on private property to take the picture, video or sound recording, or using enhancement devices (zoom) to do so.

This prompted Bayan Muna Rep. Carlos Zarate to label the measure the “anti-selfie bill,” a tag that brought wide attention to the previously unheard of measure. Selfie refers to a picture one takes of oneself, usually posted on social media.

Zarate said the bill’s definition of privacy intrusions was so broad that even taking selfies, in which the images of other persons may inadvertently be captured, would be penalized.

“That the proposed law seeks to punish even ‘the fact that no visual image, sound recording or other physical impression of a person was actually sold for gain or profit,’ makes it even more insidious,” NUJP chair Rowena Paraan had said in a letter published in the Inquirer on Sept. 1.

She said the measure could end up stifling citizen journalism and dissuade the public even from simply taking pictures or videos for personal pleasure.

PCP chair Mike Alquinto said journalists would be the targets of the measure, noting the phrase “intent to gain or profit,” as media outfits worked for profit.

“There must be clear provisions that specify that news gathering must be exempt from this section,” he had said in an Aug. 27 statement.