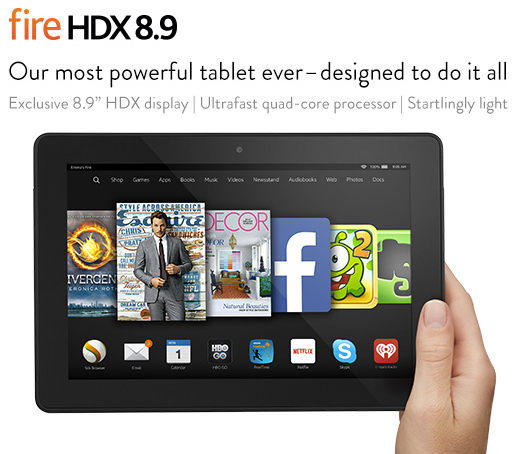 “The team has packed an incredible amount of technology and innovation into the new Fire HDX…and it’s still startlingly light,” Amazon founder and chief executive Jeff Bezos said in a release.

The tablet started at $379 and could be ordered at Amazon.com, with shipping of each of its freshly-unveiled new devices slated to begin in October.

“Fire HD is the most powerful tablet under $100,” Bezos said, noting that it is synched to the vast trove of digital content and services at Amazon.com.

The Seattle-based Internet titan also unveiled a version of the high-definition Fire tablet designed especially for children with perks such as a year of unlimited access to thousands of book, films, and games as well as free replacement if broken within two years of purchase.

A new Kindle Voyage billed as the thinnest, most advanced version to date of the popular e-reader was priced at $199, and an improved basic Kindle model was introduced with a $79 price.

“Our mission with Kindle is to make the device disappear, so you can lose yourself in the author’s world,” Bezos said.

“Kindle Voyage is crafted from the ground up for readers.”

The new offerings from Amazon.com came on the same day of reports that Apple is planning to showcase new iPads at an event in October.