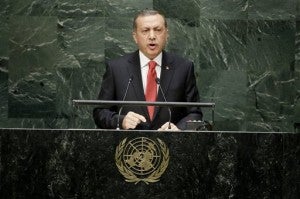 ISTANBUL — Turkish President Recep Tayyip Erdogan, known for his hostility to social networks and mobile technology, on Sunday brushed off the frenzy surrounding Apple’s new iPhone 6, saying it was much the same as its iPhone 5 predecessor.

Erdogan said that he had seen the lines snaking round an Apple sales shop in New York during his visit last week to attend the UN General Assembly.

“This brand brings out a new model pretty much every year,” Erdogan said in a televised speech in Istanbul.

“But in fact it (the iPhone 6) is not really different from last year’s version,” he said.

Erdogan has been in the past notoriously hostile to new technologies. He is particularly antagonistic towards social media, even though some top government ministers are enthusiastic Twitter users.

Twitter and YouTube were temporarily banned in Turkey earlier this year after both websites were used by opponents of Erdogan to post allegations of corruption against his inner circle.

The blocks were eventually overturned through court rulings stating the bans were not in line with rules on free speech.

In August, Erdogan compared social media to a “knife in the hand of a murderer,” declaring that he did not like to “tweet and schmeet.”

Apple, one of the United States’ best-known corporations, launched its new iPhone 6 to succeed the iPhone 5 earlier this month, selling over 10 million units in the first three days.

Erdogan made his argument against the latest device at the launch of a new brand for Turkey’s exporters, “Turkey: Discover the Potential.”

He said that brands were the engine of growth in the US economy and Turkey needed more of its own.