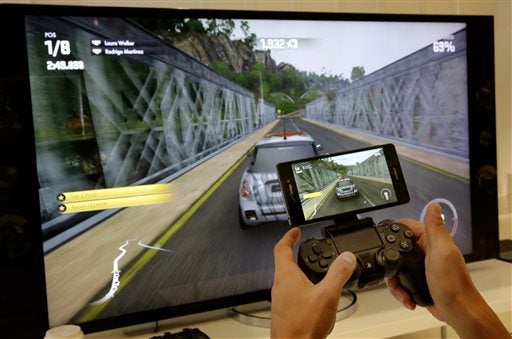 The Sony Xperia Z3 smartphone, available through Verizon, is connected to a Sony PS4 Remote Play during a demonstration at a media event in New York, Thursday Oct. 9, 2014. AP

MANILA, Philippines – Sony unveiled in the Philippines on Tuesday its newest flagship smartphone, the Xperia Z3.

The main feature of the 5.2-inch screen Android smartphone is its waterproof casing allowing the phone to be kept under 1.5 meters of fresh water for up to 30 minutes.

Sony also claims that Z3’s battery life can last up to two days.

“Consumers demand and deserve greatness from their smartphone – in design, camera, and battery life,” he said.

Gamers are in for a treat as Z3 has the capability to play their PlayStation 4 games on their console via the PS4 Remote Play feature.

Remote Play uses Wi-Fi to connect to the PS4 console and play games on the Z3 and even use a PS4 controller.

The Z3 is 7.3mm thick and weighs 152 grams. It comes in four colors: black, white, copper, and silver gray.

The Z3’s camera boasts a 25mm wide angle lens and with low light capabilities because of its 12800 ISO sensitivity feature.

The Z3 compact, the Z3 tablet compact and the Z3 share most features.

All Z3 variants will be available by fourth week of October 2014.

Two new wearable devices were also announced: The Smartband Talk that has a speaker and microphone to allow voice calls and the Smartwatch 3.