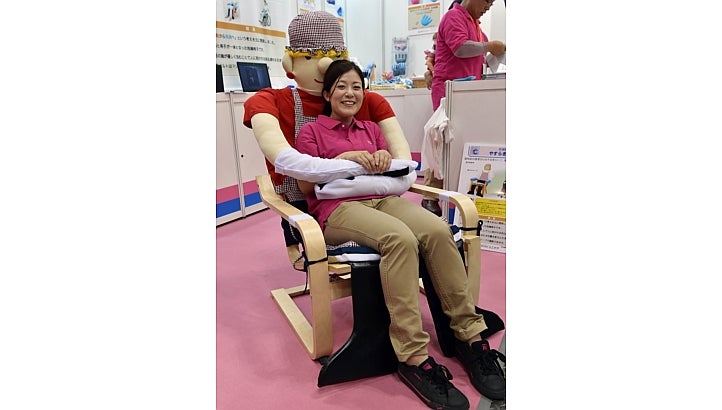 TOKYO—There are times in everyone’s life when only a hug will do. Now one Japanese company has come up with a chair that’s always ready to give a comforting cuddle.

The “tranquility chair” is built in the shape of a larger-than-life fabric doll with a friendly face and a fetching hat, but more importantly, it has long arms that wrap around the user in an affectionate embrace.

“It makes you feel safe. Anyone can use it, but it is designed for older people,” said a spokesman for UniCare, which is selling the chair, at the International Home Care and Rehabilitation Exhibition in Tokyo.

Around a quarter of Japan’s population is currently over the age of 65, a figure expected to rise to 40 percent in the coming decades.

The chair is priced at 46,000 yen (419 dollars) and there is also a version adapted for wheelchair users.

Alongside specialist vehicles, beds and toilets on display at the three-day show were a variety of unusual products designed to lift the spirits of older people, who increasingly live on their own.

UniCare’s “Life Rhythm Dolls” are programmed to remind their owners to take their medicine or go to the toilet at certain times of day.

“They are comforting for people who live alone — they can talk to them and hug them. They also play old Japanese music, which is nostalgic for older people” said the company spokesman.

Also on display were baby seal robots known as “Paro” that have been making a splash in therapeutic treatment since 2004.

The cute animatronic devices, developed by Japanese automation pioneer AIST, allow people who are not allowed live pets because of apartment rules to enjoy the soothing company of a robotic creature.

“Real animals can scratch and poo, but this one won’t,” said a demonstrator at the Paro stand.

The lifelike seal cubs move, squeak and open and close their eyes in response to their surroundings — and they even get angry if you poke them.

There are currently 3,000 of the furry electronic seals in use around the world.