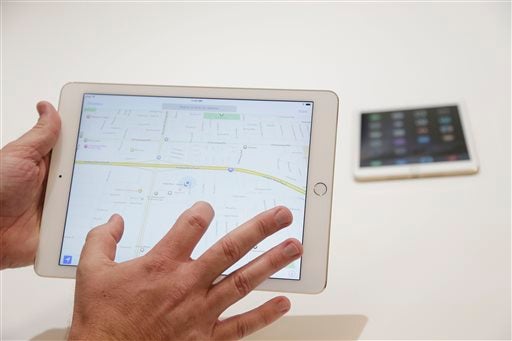 The iPad Air 2 is demonstrated at Apple headquarters on Thursday, Oct. 16, 2014, in Cupertino, California. Apple unveiled the thinner iPad with a faster processor and a better camera as it tries to drive excitement for tablets amid slowing demand. AP PHOTO/MARCIO JOSE SANCHEZ

CUPERTINO, California–Apple, facing tough competition in the tablet market, on Thursday unveiled a new line-up of iPads that feature its mobile payments system and include the fingerprint unlock used on iPhones.

The California tech giant said its iPad Air 2 would be thinner than its rivals, with upgraded graphics power and other features.

The new lineup aims to help Apple regain ground in a tablet market increasingly dominated by the rival Android platform.

Apple said its mobile payments system known as Apple Pay, allowing iPhone and iPad users to tap their devices to pay at retailers, would begin operations Monday with more banks and merchants on board.

The iPad Air 2 is 18 percent thinner than its predecessor, Apple said as it unveiled the new device at its Cupertino, California, headquarters.

“It’s so thin you can stack two of them and it will still be thinner than the original iPad.”

The new slimmed-down tablet comes after last year’s iPad launch prompted rivals to say they had a slimmer profile.

The new tablet comes with a more powerful processor that delivers livelier graphics, improved battery life and Touch ID, the fingerprint unlock system that Apple uses on its iPhones.

Apple also upgraded its smaller tablet, called the iPad Mini 3, which will also have the Touch ID system.

Apple chief Tim Cook said the iPad has been wildly successful, with 225 million units sold in the four years since the initial launch.

But in a tablet market that is cooling, the rival Android platform has been gaining share.

According to Strategy Analytics, Android grabbed 70 percent of the tablet market in the second quarter, to 25 percent for Apple, even if it remains the largest single vendor.

Cook said the Apple Pay system, which has signed up major merchants and banks as well as payment processors like Visa and MasterCard, was gaining participants.

“Just since last month, we have signed another 500 banks,” he said.

“They will be rolling out support later this year and early next year.”

TOPICS: Apple, IT, Tablet, US
Read Next
New MMDA app tells road accident sites
EDITORS' PICK
Alex Eala wins Grand Slam on Independence Day: ‘I hope I made my contribution to the country’
Palace: Duterte to announce new quarantine classifications; ‘normal’ GCQ likely in NCR Plus
Ahead of ONE: Full Blast II, Mongkolpetch warns Elias Mahmoudi: ‘Watch out for my fists’
Liza Soberano’s ‘Trese’ stint defended by voice actor Inka Magnaye
Synology NAS: A photo storage and multimedia server for your home
3 die, 110 recover from COVID-19 in Aurora province
MOST READ
‘Hindi pwedeng take 2,’ Sotto tells presidential, VP aspirants
Lacson: Kind-hearted Leni ‘in it to win’ presidency in 2022, but…
Not even found in Tiktik: Another bad word snuck into DepEd materials
Sotto, Villanueva react to LGBTIQ+ promise not to give them votes
Don't miss out on the latest news and information.