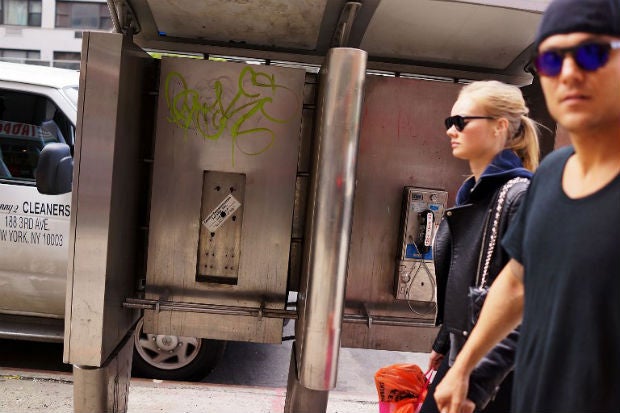 People walk by a public phone on a Manhattan street on May 2, 2014 in New York City. New York Mayor Bill de Blasio has called for proposals to turn underused phone booths into Wi-Fi hot spots. AFP

Up to 10,000 terminals will provide free Internet access up to 150 feet (45 meters) from hubs, which will be phased in across the city’s five boroughs beginning in 2015.

Free domestic phone calls can also be made from the stations, which feature a touch-screen interface, a cell phone and tablet charging station, and provide access to emergency services.

De Blasio said the CityBridge technology group was chosen to carry out the project. It requires approval by a city committee next month.

Digital advertising displays will finance the project “at no cost to taxpayers,” de Blasio said, adding that the hubs are expected to generate more than $500 million over the course of their first 12 years and create 100 to 150 jobs.

“We’re taking a critical step toward a more equal, open and connected city — for every New Yorker, in every borough,” de Blasio said.

WiFi is already available in dozens of New York parks, as well as a small part of the Chelsea neighborhood. Chelsea was part of an initiative by US technology giant Google.

In September 2013, then mayor Michael Bloomberg announced the creation of wireless corridors in parts of Brooklyn, the Bronx, Queens and Staten Island as well as a WiFi extension in parts of Manhattan, including Harlem.