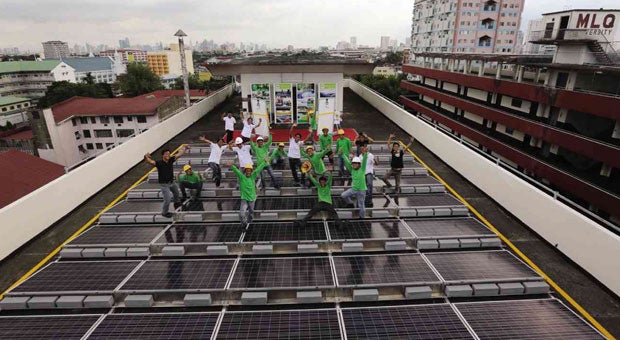 HERE COMES THE SUN Solar power technicians celebrate the inauguration of their project on the rooftop of the MLQU Monzon Hall on Wednesday. JOAN BONDOC

Officials on Wednesday assembled on the rooftop of the MLQU’s Monzon Hall to inaugurate a solar photovoltaic power plant composed of 320 solar panels and capable of producing 96 kilowatts of electricity. The system is expected to reduce the school’s monthly power bill by 20 percent.

“Solar power supply has been in the country for five years. But when you ask people about it they still respond with ‘what’s that?’” said Energy Secretary Jericho Petilla, who graced the event. “Through this project, we can show people that solar panels are here to stay. We’ve started it and there’s no stopping it.”

The technology was provided by Propmech Corp., which will charge the university P9.50 per kilowatt hour, lower than the usual rate of P11.30 kwh charged by Meralco.

MLQU president Isagani Germar said it would save the school roughly 20 percent of its monthly energy cost of P120,000.

MLQU’s unused solar energy will essentially be “deposited” to their Meralco account and deducted from their monthly bill, he said.

With the project, MLQU joined other Manila universities in the use of solar energy, namely Mapua Institute of Technology, St. Scholastica’s College and La Consolacion College.