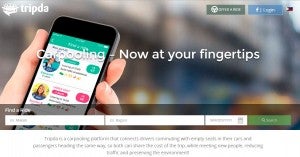 Rocket Internet, which is partly owned by Philippine Long Distance Telephone Co., said in a statement that Tripda links up drivers who have empty car seats with commuters taking a similar route.

The company said this would benefit both parties since they would split the fuel tab and bring down the transportation cost. The app only allows passengers to pay the drivers in cash.

Within five months, Tripda has successfully established itself in 12 countries around the globe including Malaysia, Singapore, Brazil and the US, Rocket Internet said.

The platform will initially focus on trips within Metro Manila and expand to other regions later on. In other jurisdictions, the app can be used for longer-range travel, making it a viable alternative to buses, trains and short flights.

In terms of security, the platform verifies drivers and passengers in multiple ways.

“The Philippines has thus far proved itself to be very open to what we are offering. Our growing community in the Philippines is giving us supportive and positive feedback, and we can really see Tripda taking off here,” said Pedro Meduna, Tripda co-founder and CEO for emerging markets.

The Brazilian-born startup already has tens of thousands of registered users and has facilitated rides for thousands of passengers, the statement said.

Philippine regulator Land Transportation Franchising and Regulatory Board is in the process of revising its rules to accommodate technology-based transportation applications like Uber, which has met resistance from taxicab operators.

Last month, the arrest of an Uber driver for operating without the necessary franchise drew flak from netizens, prompting the Department of Transportation and Communications to consider a more accommodating approach.

LTFRB Chair Winston Ginez could not be immediately reached for comment on Tripda Thursday.

DoTC: Taxis must upgrade vs Uber