MANILA, Philippines – The website of Globe Telecommunications was allegedly hacked by a group of hacktivists protesting their “poor internet connection service.”

The hacktivists identified themselves as “Blood Security Hackers” and posted a message that said “Dear Globe, your service on your internet connection is not worthy what we pay for. Do something or expect the consequence. This is just the beginning. Expect Us!”

The hacktivists also threatened that “all your data belong to us now!”

Yoly Crisanto, Head of Globe Corporate Communications, said in a statement that no customer data was compromised in the alleged breach of their website.

“Globe assures its customers that no critical customer data have been compromised as these information are not stored in the affected websites,” Crisanto said in a statement Friday.

“The said websites are used for advertising and marketing purposes only and are not connected to any of the private internal customer systems. Globe also said that its own Globe-hosted websites were not compromised,” Crisanto added.

The security breach was detected 10 p.m. Thursday night according to Globe and the four websites were “temporarily been taken down to conduct appropriate security checks.”

The hacking was reported Friday by Philippine technology blog Coorms.com which listed the websites of Globe that were breached.

As of 1:00pm Friday, the four websites listed remained offline with a message saying “we’re currently conducting a maintenance activity to improve system performance. Sorry for the inconvenience.”

Coorms reported that Globe subscribers are unable to enjoy good internet service because of their use of “Data Capping” and “Throttling.”

“May this message become the key to Globe to finally remove the limitations for their Internet Services,” the blog said.

The Facebook fan page of Blood Security Hackers has 2,120 likes as of this posting.

Chief Information Security Officer Anton Bonifacio said in the same statement that “the server where the four websites are hosted is managed by an external partner and and resides separately from the Globe Corporate and Enterprise Network, where appropriate preventive and detective controls are in place.” 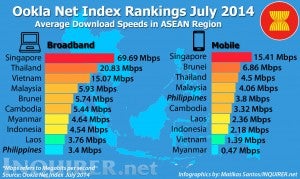 “The attack was isolated from their end and was brought about by an unpatched vulnerability which is currently being addressed. Rest assured, our security response teams are currently investigating and conducting forensics in various areas to make sure that the incident is properly managed,” Bonifacio said.

Philippine Internet Service Providers have been widely criticized for their poor service after the Philippines was reported as having the slowest internet speed in the entire Southeast Asian Region. With reports from Miguel Camus