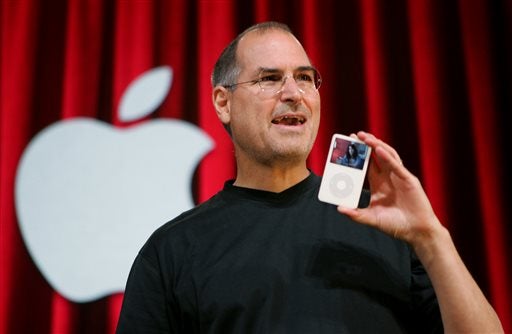 In this Oct. 12, 2005 file photo, Apple Computer Inc. CEO Steve Jobs holds up an iPod during an event in San Jose, Calif. Jurors in a class-action lawsuit against Apple Inc. on Tuesday, Dec. 2, 2014 saw emails from the late CEO and his top lieutenants that show Jobs was determined to keep Apple’s popular iPod music players free from songs that were sold by competing online stores. AP

OAKLAND, California — Legendary Apple CEO Steve Jobs had seven words for a subordinate when he learned that a rival company was about to introduce a program that would let music fans buy songs anywhere and play them on Apple’s iPod devices.

“We may need to change things here,” Jobs said in a terse, 2005 email that was shown to jurors in federal court Tuesday, on the opening day of trial in a billion-dollar antitrust lawsuit that accuses Apple Inc. of using unfair tactics to maintain its dominance in the digital music business.

Plaintiffs’ attorney Patrick Coughlin also showed jurors a 2003 email from Jobs, written about the launch of another competitor’s online music store, which said, “We need to make sure that when Music Match launches” their store, “they cannot use iPod.”

And while Jobs died in 2011, he is a central figure in the class-action case. Sweeney said she will show a video of Jobs testifying in a 2011 deposition later this week. A partial transcript of that session shows Jobs asserting he couldn’t remember details of actions taken several years earlier, while also betraying signs of his legendary impatience. In one exchange with attorneys, Jobs acknowledged that he helped write a press release statement that accused RealNetworks of “adopting the tactics and ethics of a hacker to break into the iPod.”

Jobs’ statements have turned out to be pivotal in other antitrust cases that Apple has faced in recent years, including one in which a judge found Apple conspired with publishers to set e-book prices. In another, a federal judge cited “compelling evidence” that Jobs was a central figure in an alleged conspiracy by leading tech companies to abstain from hiring each other’s employees.

A Stanford economist will testify later in the iPod trial that Apple overcharged iPod buyers by nearly $350 million. Under federal antitrust law, the Cupertino, California company could be ordered to pay three times that amount if jurors agree that Apple’s actions were anticompetitive.

But attorneys for Apple said their own experts will testify that the plaintiffs’ economic analysis is deeply flawed. Apple lawyer William Isaacson also told jurors that Apple had legitimate competitive reasons to update its software with new consumer features as well as code that blocked music from other sources. Legitimate product improvements are allowed under antitrust law, regardless of their impact on competitors.

The close integration between Apple’s iPods and its iTunes store allowed them to work better for consumers, Isaacson said, adding that software developed by rival music sellers such as RealNetworks could have posed a security threat to the iTunes software.

“Apple products would not be as good or secure if third parties can come into the system,” he said.