Netizens urged to use social media for disaster mitigation 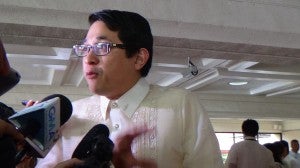 “Let us use social media sites such as Facebook and Twitter to aid in the efforts of rescue, relief and rehabilitation efforts during calamities such as typhoons, earthquakes and armed conflicts,” Aquino said  in  a statement.

“We can harness the vast power of social media and the Internet to help save lives of fellow Filipinos who are in danger during calamities and other incidents,” the senator said.

Typhoon “Ruby” is expected to hit Metro Manila and Southern Luzon on Monday after whipping the Eastern Visayas and Bicol regions over the weekend.

“With the advanced technology that we have such as Internet-capable smartphones and cameras, we can play a big part in saving lives during these challenging times for our people,” he added.

For important updates during calamities, Aquino also urged netizens to follow agencies like the Department of Social Welfare and Development, the Philippine National Police, the National Disaster Risk Reduction and Management Council, Pagasa/DOST and news agencies on Twitter and Facebook

The senator earlier encouraged netizens to be more actively involved in the government’s campaign against illegal activities, saying social media has a key role in preventing and solving crimes.

Aquino cited  the arrest of policemen involved in the daring daytime robbery along Edsa, which he said would not have been possible if not for the brave netizen who posted the photo online.

Social media, he said,  has been a good source of worthy causes, such as the finding of missing persons, reporting of unlawful incidents, lauding local heroism, and fund raising and volunteer recruitment for socio-civic projects.

“We can use the Internet in meaningful activities like helping the government in its quest to lessen, if not completely eradicate, crimes in our society,” Aquino said.

Typhoon ‘Ruby’ heads to Mindoro; Signal No. 2 up in Metro Manila