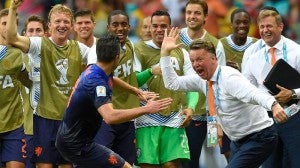 WASHINGTON — Football’s World Cup and the Ebola outbreak topped the list of topics most shared by Facebook users around the globe in 2014, the social networking giant said Tuesday.

The World Cup was the most shared item globally, followed by the Ebola crisis, Brazilian elections, the death of actor Robin Williams and the “Ice Bucket Challenge” to raise funds for research on Lou Gehrig’s disease.

Rounding out the top 10 were the conflict in Gaza, Malaysia Airlines — which lost two aircraft during the year — American football’s Super Bowl, the Ferguson, Missouri protests over the police shooting death of an unarmed black man, and the Sochi Winter Olympics.

But the most shared items varied considerably in different countries.

In the United States, Ebola and the Ice Bucket Challenge were the top two items, followed by Robin Williams, the Super Bowl and the Ferguson, Missouri protests. The World Cup was number six for US users.

Britain’s most shared topic was the Scottish referendum, followed by the Ice Bucket Challenge and the World Cup.

India’s general election was the hottest topic in that nation, Facebook said, with the Indian Premier League of cricket second. In Mexico, it was the World Cup, the arrest of drug cartel leader Joaquin “El Chapo” Guzman and Pope Francis.

In Spain, the top item was the Primera Liga of football, political activist Pablo Iglesias and the World Cup.

Germany’s most shared news was the World Cup — Weltmeisterschaft — won by that country’s squad, followed by the country’s Bundesliga football league and entertainer Helene Fischer.

For France, the World Cup topped the list followed by President Francois Hollande and US rap artist Pharrell Williams.

In Brazil, the biggest topic was the national election, followed by the World Cup hosted in the country and the annual festival Carnival.

The “game of the year” on Facebook was Cookie Jam, a puzzle game developed by Los Angeles-based Social Gaming Network.

“It launched a little under a year ago and scaled to a great audience of five million plus players,” said Facebook games partnership chief Dan Morris.

“Games are hugely important to Facebook,” Morris said. “There are hundreds of millions of people playing a game on the Facebook platform or playing a mobile game through the Facebook app. We continue to invest on both sides of that equation.”

Facebook and the developers get revenue largely from in-app game purchases, and to a lesser degree from advertising.