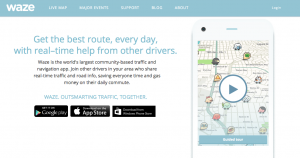 LOS ANGELES — When the people whose houses hug the narrow warren of streets paralleling the busiest urban freeway in America began to see bumper-to-bumper traffic crawling by their homes a year or so ago, they were baffled.

When word spread that the explosively popular new smartphone app Waze was sending many of those cars through their neighborhood in a quest to shave five minutes off a daily rush-hour commute, they were angry and ready to fight back.

They would outsmart the app, some said, by using it to report phony car crashes and traffic jams on their streets that would keep the shortcut-seekers away.

Months later, the cars are still there, and the people are still mad.

“The traffic is unbearable now. You can’t even walk your dog,” said Paula Hamilton, who lives on a once quiet little street in the Santa Monica Mountains in a neighborhood called Sherman Oaks.

Hamilton’s winding little road up the low-slung mountains that separate the city’s traffic-clogged San Fernando Valley from its equally traffic-clogged west side is now filled each weekday morning with a parade of exhaust-belching, driveway-blocking, bumper-to-bumper cars.

So is practically every other nearby street that parallels the busy Interstate 405 freeway.

On the other side of the mountain, where cars cruise down roads into tony Brentwood, traffic has also been the hot topic of late, with several people telling each other they will fool the app with their phony accident reports.

If they have, they’ve obviously failed. Longtime resident Joann Killeen said her four-mile (6.4-kilometer) commute to UCLA, where she teaches a public relations class, can take two hours during rush hour. “The streets on the west side are no longer a secret for locals, and people are angry,” she said.

“With millions of users in LA, fake, coordinated traffic reports can’t come to fruition because they’ll be negated by the next 10 people that drive down the street passively using Waze,” she said.

Many residents have been complaining to local officials.

“First thing this morning, my field deputy took an earful from a resident up there,” said City Councilman Tom LaBonge, who represents Hamilton’s neighborhood.

There are some things that can be done to mitigate the situation, said Los Angeles Department of Transportation spokesman Bruce Gillman, like placing speed bumps and four-way stop signs on streets. Lanes could even be taken out to discourage shortcut seekers, but a neighborhood traffic study would have to be done first.

“It’s to make streets so people can walk, people can bike,” Gillman said.

But the bigger problem, Gillman said, is that everybody is using smartphone apps these days and they will quickly find every shortcut out there.

“I plead guilty to that,” said Richard Close, who is president of the Sherman Oaks Homeowners Association that represents Hamilton’s neighborhood.

As soon as he gets over the hill to Killeen’s neighborhood, Close said, he uses the app to find the fastest route to his office in Santa Monica. Killeen herself admitted she uses Waze and also Sigalert.com to get around town.

Which seems to speak to Mossler’s contention that the real problem facing LA residents isn’t the traffic app. It’s the traffic.

Los Angeles County has 7.6 million registered vehicles, more than some states. The Interstate 405 Freeway that parallels the unhappy neighborhoods carries 379,000 cars a day.

So while a shortcut down a sleepy street might not be a problem in a place like Des Moines or even Detroit, it’s a different story in a city that last year was again ranked No. 1 for the nation’s most time-consuming traffic jams.

“Los Angeles is a powder keg of cars, construction and population that will only continue to get worse,” Mossler said she wrote to a person from the 405 neighborhood who complained. “With or without Waze, drivers will be looking for alternatives to major thoroughfares.”

What money lessons can we learn from the Jews?