Antibiotics resistance could kill 10m a year by 2050 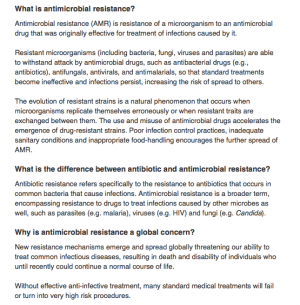 LONDON, United Kingdom – A British government-commissioned review has found that resistance to antibiotics could account for 10 million deaths a year and hit global gross domestic product by 2.0 to 3.5 percent by 2050.

The Review on Antimicrobial Resistance said surgeries that have become widespread and low-risk thanks to antibiotics, such as caesarean sections, could become more dangerous without urgent action.

It found the region with the highest number of deaths attributable to antimicrobial resistance would be Asia with 4.7 million followed by Africa with 4.1 million, while there would be 390,000 in Europe and 317,000 in the United States.

For comparison, the review estimated that the second-biggest killer, cancer, would account for 8.2 million deaths a year by 2050.

“The damaging effects of antimicrobial resistance are already manifesting themselves across the world,” the report said.

“Antimicrobial-resistant infections currently claim at least 50,000 lives each year across Europe and the US alone,” it added.

The calculations were based on existing studies by the think tank Rand Europe and the consultancy KPMG.

It warned drug resistance was not “a distant and abstract risk” and called for “a major intervention to avert what threatens to be a devastating burden on the world’s healthcare systems”.

The review emphasized the economic advantage of investment in tackling the problem early.

It said that three types of bacteria — the Klebsiella pneumonia, Escherichia coli (E. coli) and Staphylococcus aureus — were already showing signs of resistance to medicine.

Treatment of HIV, malaria and tuberculosis were broader public health issues in which resistance “is a concern”, the report said.

In the United States, antibiotic-resistant infections are associated with 23,000 deaths and two million illnesses each year.

Improper use of antibiotics may lead to evolution of infectious superbugs

Drugstores to show infomercial vs antibiotics