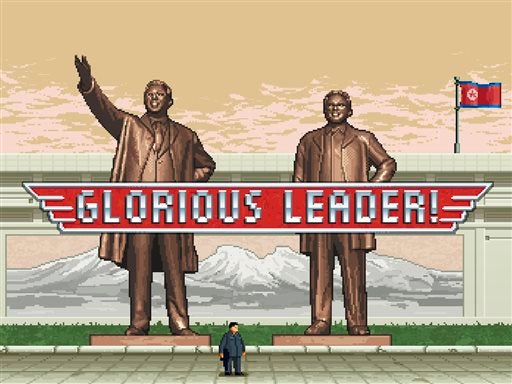 This photo provided by Moneyhorse Games shows a scene from the video game, “Glorious Leader.” AP

LOS ANGELES — The creator of a satirical video game that depicts Kim Jong Un as a gun-toting, unicorn-riding hero has no plans to cancel his zany creation following a cyberattack and threats of violence against Sony Pictures that the FBI has attributed to North Korea.

In fact, “Glorious Leader!” creator Jeff Miller is now more motivated than ever to finish his game.

While North Korea forces have frequently been depicted as the adversary in games, such as “Tom Clancy’s Ghost Recon 2” and “Homefront,” ”Glorious Leader!” cast the nation’s leader as the protagonist — with cameos from such folks as Dennis Rodman and Kim Jong Il.

The retro-style, run-and-gun game comically puts players in the shoes of a super-powered Kim Jong Un as he battles waves of American drones and soldiers with weapons like a machine gun and bazooka. Miller is planning levels set in such locations as the streets of Pyongyang and atop Paektu Mountain. He’s now planning another on the Sony Pictures backlot.

“We want the game to be as topical as possible,” said Miller, adding he hasn’t received any threats from North Korea or hackers and isn’t afraid of any backlash because the game makes Kim Jong Un “look totally awesome.”

Miller’s Atlanta, Georgia-based Moneyhorse Games has been independently working on the tongue-in-cheek game off and on for over a year. In response to the fallout from the cyberattack this week, Miller launched a crowdfunding campaign Wednesday asking for $55,000 by Jan. 15 to finish “Glorious Leader!” He had originally planned to release it earlier this year. He’d raised about $3,500 from 151 backers as of mid-day Friday.

“I should probably ask for more funds now to beef up our cybersecurity,” Miller said. “We didn’t know things were going to get this weird.”

Miller, who plans to release the downloadable game for PC and mobile devices, said Thursday he also reached out to Microsoft Corp. and Sony Corp. about making the game available on their respective Xbox and PlayStation consoles. Microsoft declined to distribute “Glorious Leader!” However, he said Sony was responsive when he last communicated with the company in October before the attack.

“I think I’ll wait a little while before I reach out to them again,” Miller said.

A spokesman for Sony Computer Entertainment of America did not immediately return messages seeking comment.

The FBI formally accused the North Korean government on Friday of being responsible for the hacking attack against Sony, while President Barack Obama said Sony “made a mistake” in halting the Dec. 25 release of “The Interview,” a comedy about a plot to assassinate the North Korean leader.

The hackers sent a new message Friday to Sony Pictures Entertainment, gloating over the studio’s decision to cancel the release of “The Interview” and warning not to distribute the film in any form.