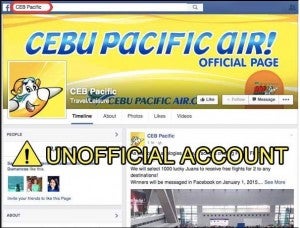 The promo, claiming that Cebu Pacific was allowing “1,000 lucky Juans to receive free flights for two to any destination,” was posted on the “CEB Pacific” Facebook page—which Cebu Pacific later said was not its official account.

“Cebu Pacific Air would like to apologize for the situation at Naia Terminal 3 on Dec. 25, 2014,” the fake page said.

The post included a photograph of Cebu Pacific’s packed passenger counters in what appeared to be Naia 3, where the Gokongwei-led carrier mainly operates.

CEB Pacific’s page was still a big hit among netizens, who either believed such a promo was true or were willing to amuse themselves online.

Within two hours after the promo was posted, it had drawn over 20,300 Facebook “likes” and more than 18,300 comments.

In their comments, people wrote down some of Cebu Pacific’s popular international destinations, like Japan and Singapore. Others posted more exotic locales the carrier has yet to reach, like Nepal and “the Vatican.”

In its official account, Cebu Pacific said: “We have already reported this page (CEB Pacific) to Facebook, and will continue reminding everyone to be vigilant.”

As of 4:20 p.m. Friday, the CEB Pacific page was still online and continued to lure likes and comments.