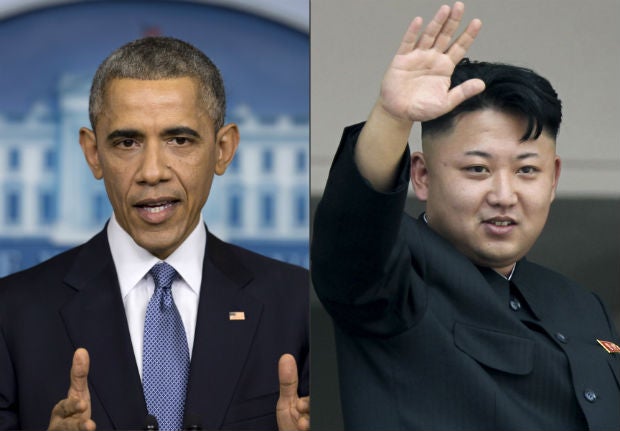 This photo combination shows U.S. President Barack Obama, left, and North Korean leader Kim Jong Un. North Korea has compared Obama to a monkey and blamed the U.S. for shutting down its Internet amid the hacking row over the movie “The Interview.” AP Photos

SEOUL, South Korea – North Korea suffered a new Internet outage on Saturday shortly after calling US President Barack Obama a “monkey” over the release of a comedy film about a fictional plot to kill its leader.

The latest shutdown came after the isolated dictatorship’s powerful National Defense Commission (NDC) threatened “inescapable deadly blows” over the film and accused the US of “disturbing the Internet operation” of media outlets after a blackout earlier this week.

The cause of the outages of the country’s already limited Internet access has not been confirmed.

The earlier shutdown triggered speculation that US authorities may have launched a cyber-attack in retaliation for the hacking of Sony Pictures — the studio behind “The Interview” — which Washington said Pyongyang was behind.

The outage on Saturday evening also affected telecommunication networks in the pariah state, according to Chinese state-run Xinhua news agency.

“At Pyongyang time 7:30 pm (1030 GMT) North Korea’s Internet and mobile 3G network came to a standstill, and had not returned to normal as of 9:30 pm,” Xinhua said, adding that its reporters in the North found the Internet to be “very unstable” throughout the day.

“This time there wasn’t the hours of routing instability that presaged the outage like last time. Although it did flicker back on for a moment, and go back down and stay down,” said Doug Madory, director of Internet Analysis with Dyn Research.

“If an outside force took it down again, it did it more efficiently than the previous incident.”

The North has about one million computers — mainly at educational and state institutions — but most lack any connection to the World Wide Web.

All online content and email are strictly censored or monitored with Internet access limited to a handful of top party cadres, propaganda officials and expatriates.

The NDC accused Obama of taking the lead in encouraging cinemas to screen “The Interview” on Christmas Day. Sony had initially cancelled its release after major US cinema chains said they would not show it, following threats by hackers aimed at cinemagoers.

“Obama always goes reckless in words and deeds like a monkey in a tropical forest,” a spokesman for the NDC’s policy department said in a statement published by the official KCNA news agency.

“If the US persists in American-style arrogant, high-handed and gangster-like arbitrary practices despite (North Korea’s) repeated warnings, the US should bear in mind that its failed political affairs will face inescapable deadly blows,” the spokesman said.

He accused Washington of linking the Sony hacking to North Korea “without clear evidence” and repeated Pyongyang’s condemnation of the film, describing it as “a movie for agitating terrorism produced with high-ranking politicians of the US administration involved”.

The film took in $1 million in its limited-release opening day, showing in around 300 mostly small, independent theatres. It was also released online for rental or purchase.

The film, which has been panned by critics, has become an unlikely symbol of free speech thanks to the hacker threats that nearly scuppered its release.

The low-brow comedy revolving around the fictional assassination of North Korean leader Kim Jong-Un played to packed cinemas across the US.

A file sharing website reported it had been illegally downloaded more than 750,000 times.

Online services for Sony’s PlayStation and Microsoft’s Xbox gaming consoles, which had decided to release the film online, went down Thursday, apparently attacked by hackers.

Microsoft’s online network for its Xbox gaming console was restored to nearly full service Friday but the PlayStation network remained down.

The NDC spokesman called again for a joint investigation into the Sony hack, which has already been rejected by the US, while accusing Washington of “beating air after being hit hard by others”.

“In actuality, the US, a big country, started disturbing the Internet operation of major media of the DPRK (North Korea), not knowing shame like children playing tag,” he said.

From Monday night, websites of the North’s major state media went dead for hours with the cause of the attack unclear.

The US has refused to say whether it was involved in the shutdown.

KCNA previously compared Obama to a black “monkey” in a zoo in May, prompting Washington to condemn the comments as “ugly and disrespectful”.

‘The Interview’ hits US theaters