Cutting-edge smartphone technology to expect in 2015 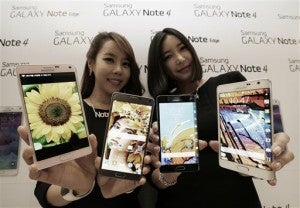 In this Sept. 24, 2014 file photo, Models pose with Samsung Electronics Co.’s latest Galaxy Note 4 and Galaxy Note Edge smartphones as they are unveiled in Seoul, South Korea. By the end of the year, there are expected to be about 7 billion cell phone subscriptions _ about the same as the world’s population. (AP Photo/Ahn Young-joon, File)

The world’s smartphone industry will likely achieve a quantum leap in 2015 with a slew of cutting-edge technologies adopted in handsets, including a curved 4K display, a 64-bit processor and faster telecommunications chips.

Some anticipated features of the high-end smartphone include a dual curved-edge display, an aluminum case and a 64-bit Exynos mobile processor. Samsung’s marquee smartphone will also likely support the tri-band Long Term Evolution-Advanced technology, which has a transfer speed of 300 megabits per second ― four times faster than the current fourth-generation LTE.

Pressed by Apple’s high-end iPhones and budget Chinese devices, the Seoul-based smartphone-maker will make further efforts to diversify its product portfolio too.

The long-awaited Tizen-powered smartphone, named the Z1, will be one of Samsung’s low-cost products to be released in global markets reportedly starting in India in January.

Rumor has it that the first Tizen smartphone will come with a price tag of $100, and that it will sport a 1.2GHz dual-core processor, 768MB RAM and a 3MP rear-facing camera.

Market analysts forecast more manufacturers will jump on the bandwagon to beef up their affordable smartphone lineups.

“The competition in the global smartphone market will intensify as extremely cheap handsets will continue to be rolled out this year,” said Song Eun-jung, an analyst at Hi Investment and Securities.

“The race to gain more market share with budget products, however, could lead to a point where the firms hurt their own profits.”

Posing a challenge to the duopoly of Samsung and Apple in the world’s smartphone market, Huawei and Xiaomi, the third- and fourth-largest smartphone-makers, are to unveil their new flagship models the Mi5 and Ascend P8, respectively, at the International CES, an electronics trade show slated to be held in Las Vegas in January.

Riding the growth momentum created by the G3 smartphone, LG Electronics will likely make bold attempts to outrun its competitors by packing trailblazing technologies, including a 4K display and Qualcomm’s 64-bit Snapdragon 810 processor, into its next flagship models including the G4 and G Flex 2 this year.

Despite all the technological advancements and innovations to be achieved this year, market analysts expected that the growth rate of the global smartphone market will slow down to some extent.

The number of global smartphone shipments is expected to increase 12.2 percent on-year ― falling from 26.3 percent in 2014 ― to 1.4 billion in 2015, according to research institute IDC.