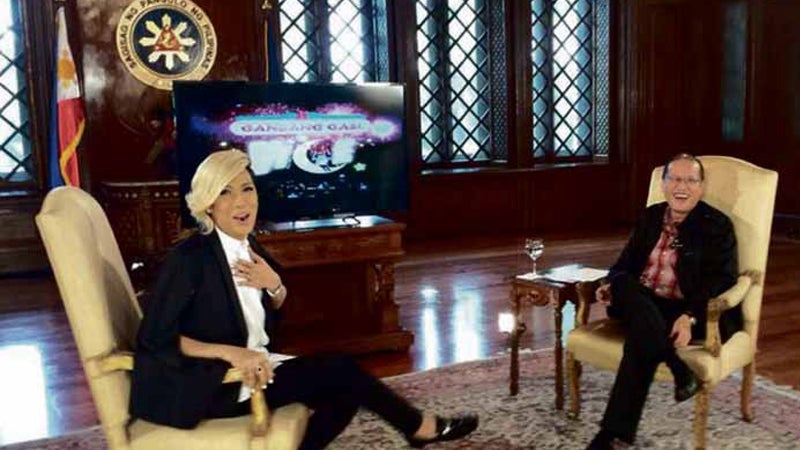 THE INTERVIEW President Aquino with comedian Vice Ganda during their interview in Malacañang aired by ABS-CBN on Sunday. Note shiny floor of the Palace. The comedian and the President’s 38-minute give and take grabbed the top worldwide spot during its airing. SCREEN GRAB FROM VICE GANDA’S FACEBOOK PAGE

MANILA, Philippines–When President Aquino discusses his love life and receding hairline, and sings a Freddie Aguilar song on national TV, expect it to be a riot and a trending topic on Twitter.

So far, “PnoyonGGV” not only breached Twitter’s trending topics locally, it also grabbed the top worldwide spot during its airing on Sunday night.

And most of the netizens were pleased.

Netizen @atty_rain shared the same sentiment. “It showed the ‘human’ side of [Aquino]. [In my opinion], the guesting was good for him. His supporters love to see him show his funny side. (H)is haters have to know that he’s human. (E)veryone needs good vibes to start the year,” she told Inquirer Social Media.

The interview touched on topics ranging from the President’s thoughts on fatherhood to his being an ordinary civilian again. Among the highlights was when Aquino sang some lines from Freddie Aguilar’s “Estudyante Blues.”

User @tisyiann thought it was so far GGV’s best episode.

But there was negative feedback as well, and not just from journalists who had wanted to sit down with the President to tackle more serious political issues.

ArchAngel left a comment on a story run by Inquirer.net: “Andaming pwede mag-interview sa kanya, e sa comedian … pa nagpa-interview (Of all possible interviewers, why did he allow a comedian to do the job?).”

The hashtag continues to trend in Twitterverse on Monday afternoon, with users getting a replay of the interview through a streaming service.–Denison Rey Dalupang, Inquirer Social Media