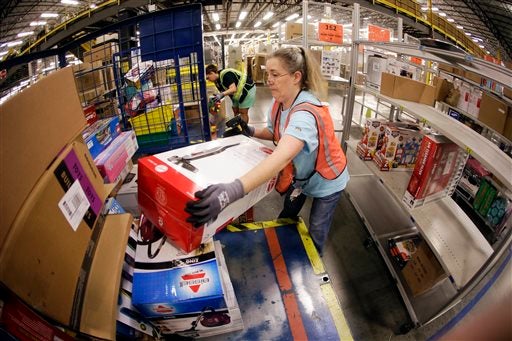 In this Dec. 1, 2014 photo, Teresa Clark fills an order at the Amazon fulfillment center in Lebanon, Tenn. Shares of Amazon.com jumped over 8 percent in aftermarket trading after the e-commerce giant beat quarterly profit expectations by a mile, the company announced, Thursday, Jan. 29, 2015. (AP Photo/Mark Humphrey)

Operating expenses rose 15 percent to $28.74 billion but that was less than some analysts had expected Amazon would spend. Investors have long wanted Amazon to show some restraint as it invests in its business, and this metric seemed to be a sign that Amazon is willing to do that. Wedbush Securities analyst Michael Pachter said the lower-than-expected costs were related to flat fulfillment expenses — what the company spends on its distribution centers and deliveries — during the holiday season even though Amazon shipped 100 million more free items. The company also spent less on marketing expenses since the launch of its new hardware like Fire TV and the Fire Smartphone are behind it.

Prime membership grew 53 percent in 2015. Two-day shipping costs Amazon a pretty penny but membership means more revenue from customers in the long run. Pachter estimates there are about 35 million Prime members worldwide. And he pointed out the company is making untraditional efforts to get more members. For example, it cut the price of its Prime membership to $72 one Saturday in January and let non-Prime members stream its Golden Globe winning series “Transparent” starring Jeffrey Tambor.

“Little promotions like that are going to drive prime membership and they’ll continue to really promote it,” Pachter said.

Some caution that one quarter of disciplined spending does not a trend make. In a call with investors, Piper Jaffray analyst Gene Munster pointed out that over the past two years it has been a “little bit of a roller coaster” for Amazon’s gross margin, a key metric that shows how big a percentage of revenue is spent on investing back into the company.

“There’ve been points of optimism followed by points of frustration,” he said and asked the company how they plan to “smooth out some of this roller coaster mentality.”

CFO Tom Szkutak acknowledged that Amazon has been in a “heavy investment cycle.” He said the company is being “selective” about its investment opportunities but didn’t give any details, saying it is still finalizing spending plans for 2015.

“The question is, is this a one-time hiccup or are they going to repeat it,” Wedbush’s Pachter said. “If I see this for two, three or four quarters I will believe it.”

Like death and taxes, ‘elites we will always have with us’ – national scientist