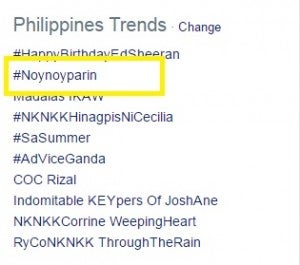 MANILA, Philippines – Malacañang on Tuesday welcomed the popularity of the hashtag #Noynoyparin on Twitter, which has been trending for two days.

(The expression of the sentiment of the people is part of a healthy democracy.)

The hashtag #Noynoyparin is being used by those expressing support for President Benigno Aquino III despite the controversies he has been facing, the latest of which is the Mamasapano clash that left 44 elite policemen dead.

Coloma said the trust of the people in their leader is the basis of democracy.

He pointed out that while in the past, only media has the power to popularize issues, social media has allowed the people to publicize their own views.

(Their idea can trend. It can be known by thousands of people, even millions, because of the prevailing democratic space.)

#Noynoyparin started trending on Twitter on Monday after televangelist Brother Eli Soriano tweeted his support for the President.

He questioned the call of Catholic church leaders for Aquino to resign.

“I hope he doesn’t resign! I believe he is an honest person,” Soriano said in Filipino over Twitter.

Soriano, who is the charismatic head of the Members Church of God International and host of the television program Ang Dating Daan, has since been including the hashtag in his tweets, which have been retweeted by hundreds of followers.

While the President already claimed responsibility for what had happened, he also blamed the SAF head for not heeding his reminder to coordinate with concerned agencies and officials. He was also accused of letting resigned PNP chief Alan Purisima direct the operation despite being under preventive suspension. On the other hand, PNP office-in-charge Leonardo Espina and Interior Secretary Manuel Roxas II were reportedly left in the dark.