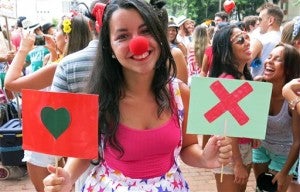 WASHINGTON–Tinder, the popular dating app which allows smartphone users to find a partner by swiping on a picture, launched a premium, paid subscription version of the service Monday.

Tinder Plus, which has been tested since late last year, has subscription fees varying by age and country.

“We’ve priced Tinder Plus based on a combination of factors, including what we’ve learned through our testing, and we’ve found that these price points were adopted very well by certain age demographics,” spokeswoman Rosette Pambakian said in a statement.

“Lots of products offer differentiated price tiers by age, like Spotify does for students, for example.

“Tinder is no different; during our testing we’ve learned, not surprisingly, that younger users are just as excited about Tinder Plus, but are more budget-constrained, and need a lower price to pull the trigger.”

The app has spread widely among smartphone users, getting particular attention at the Sochi Olympics when athletes bragged about “tindering” for fast hookups.

“Tinder Plus is a new premium addition to the Tinder experience,” the dating app’s website said.

“With Tinder Plus we’re giving our users access to their two most-requested features: Undo and Passport.”

The “undo” feature allows users to “take back” a swipe, so if someone accidentally swipes left on a picture–rejecting a potential date–he or she can find that person again later.

“They are no longer lost in the Tindersphere forever. Get them back with the touch of a button,” the statement said.

The “Passport” feature allows users to change their location to match with people around the world, such as ahead of a planned vacation.

“Navigate between your current location and new destinations,” Tinder said.

With apps like Tinder, prospective daters can see pictures of people who are nearby. If they see someone they like, they can swipe right to indicate interest. People who both swipe right on each other’s profiles can then contact each other.