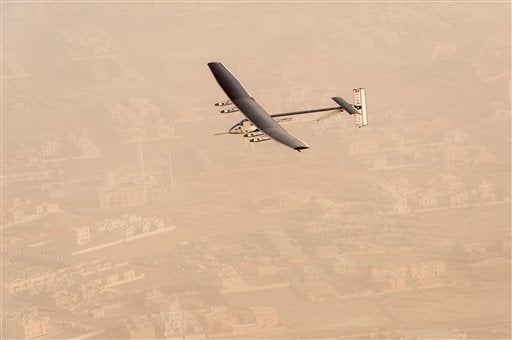 In this photo released by Solar Impulse, “Solar Impulse 2”, a solar-powered airplane flies after taking off from Al Bateen Executive Airport in Abu Dhabi, United Arab Emirates on Monday, March 9, 2015, marking the start of the first attempt to fly around the world without a drop of fuel. AP

DUBAI, United Arab Emirates— Two Swiss pioneers are attempting to fly around the world in a solar-powered airplane without a drop of fossil fuel. Here’s a look at the plane and the pioneers behind it:

How is the plane flying only on solar power?

Described by its creators as “an airborne laboratory,” the single-seat Solar Impulse 2 has 17,248 ultra-efficient solar cells that transfer solar energy to four electrical motors that power the plane’s propellers.

How fast will it fly and at what heights?

The plane’s ideal flight speed is about 25 knots, or 45 kph (28 mph), though that can double during the day when sun’s rays are strongest. 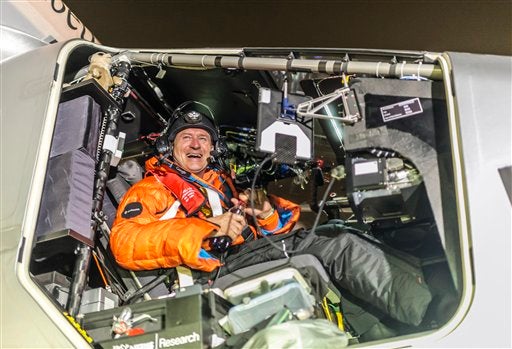 In this Monday, March 9, 2015 photo released by Solar Impulse, pilot Andre Boschberg reacts after landing a Swiss solar-powered plane in Muscat, Oman, after it took off from Abu Dhabi early Monday, marking the start of the first attempt to fly around the world without a drop of fuel. AP

During landing and takeoff, the plane is guided by runners and bicyclists who help steady it.

Who are the Swiss pioneers behind?

Psychiatrist Bertrand Piccard, 57, is the son of undersea explorer Jacques Piccard and a grandson of balloonist Auguste Piccard.
In 1999, he became the first person to circumnavigate the globe non-stop in a hot air balloon. André Borschberg, 62, is both an investor and an entrepreneur.

He is CEO and co-founder of Solar Impulse, which he started in 2003 with Piccard. The two men will trade off piloting during layovers.

What are the challenges?

Piccard and Borschberg will have to make it across Asia before the start of the monsoon season. Their physical and mental endurance will be tested as they fly over the Pacific and Atlantic oceans. Those legs of the trip mean five days and five nights of flying alone.

Borschberg has been practicing yoga and Piccard self-hypnosis to prepare for the long solo flights. They aim to rest a maximum of 20 minutes straight, repeating the naps 12 times over a 24-hour period. Goggles worn over the pilot’s eyes will flash lights to wake him up.

Neither pilot will be able to stand in the cockpit while flying, though its seat reclines for stretching and its cushion can be removed for access to a toilet. There is no running water onboard. Armbands placed underneath their suits will buzz if the plane isn’t flying level. 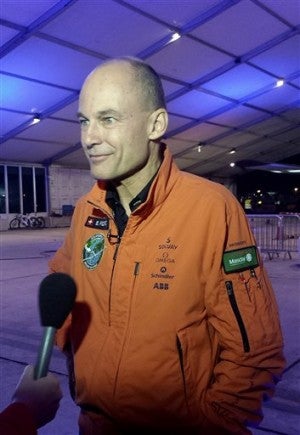 Where will the plane make its layovers and why

The actual flight days are just 25, but the course of the journey is roughly five months because organizers plan public events for governments, schools and universities along the way.

After reaching Ahmedabad, India, the team heads to another Indian city, then Myanmar and to Chongqing and Nanjing in China.

After crossing the Pacific and landing in Hawaii, they plan to fly across the US, with stopovers in Phoenix and New York City. After crossing the Atlantic, the team says they either will stop in southern Europe or Morocco before finishing where the journey started in Abu Dhabi.

What do organizers hope to accomplish?

The project, which began in 2002 and is estimated to cost more than $100 million, is aimed at highlighting the importance of renewable energy and the spirit of innovation.

Piccard and Borschberg encourage people to discuss the project online using (hashtag)FutureIsClean to send a “strong message for clean technologies.”

They hope to mobilize politicians, governments, celebrities and private citizens ahead of the Conference on Climate Change of the United Nations, which will define the new Kyoto protocol in December 2015 in Paris.

Those curious can track the aircraft on Solar Impulse’s website, which provides live information about the plane’s battery status, energy consumption, location and flight path, as well as how much the pilot has slept and how much food and water he has left. A video feed shows the plane’s Monaco-based control room and footage from the cockpit.

Solar-powered plane takes off from Oman, heads to India